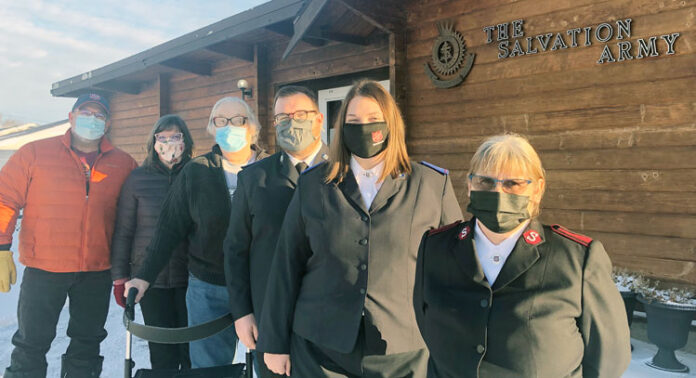 ‘Tis the season of giving, and for The Salvation Army that means giving of yourself.

In the lead-up to Christmas, The Salvation Army Meadow Lake has been receiving additional support, not only in the form of two cadets visiting the community from the East Coast, but also from past officers who still call Meadow Lake home.

“When we were here as the Salvation Army officers during our active service, we were here not as a job, it was a calling,” explained Maj. Peter Eason who, along with his wife, Karen, retired from their roles as Salvation Army officers last year. “It’s a calling to be part of the community, a calling to share the love and the good things of God with others. And, Christmas, of course, is the most wonderful time of the year to show that.”

Eason went on to say, when he and his wife retired, it didn’t change their calling. As such, the two have been actively assisting Aux. Capt. Glenna Cryderman, the current officer in charge in Meadow Lake, with fundraising efforts and other aspects of The Salvation Army’s annual efforts during the holidays.

“The Salvation Army is still where we attend, it’s our community of faith, and coming together like this is just a natural extension not so much of what we did vocationally, but just because that’s who we are as people,” Eason said.

According to Cryderman, the combined efforts of past Salvation Army officers, as well as cadets (pastors-in-training) Zach and Julia Marshall have been a blessing during what has been a challenging year.

“Peter and Karen are always great support, and Flo (former Salvation Army Maj. Flo Campbell) has also been a great support to me,” Cryderman said. “Some of that has to do with the fact I had a personal relationship with them prior.

Relationships in any organization are what really makes things work. As for Julia and Zach, they have helped with the kettles, with Christmas hampers, with all sorts of things.”

The Marshalls, who are originally from Newfoundland and Halifax respectively, arrived in Meadow Lake Dec. 10, but are scheduled to leave today (Dec. 23). They were here as part of an internship with The Salvation Army College for Officer Training in Winnipeg. They are scheduled to be commissioned as Salvation Army officers in June 2022.

“It is unique because in the years we were here, it was not often we would have cadets,” Eason noted. “In fact, I don’t believe we had any the entire time we were here. The opportunity to have these cadets and, of course, to now have Glenna here to take over where we left off, as well as Flo still in the community, it’s a unique opportunity to bring the past and the present and, to some degree the future, together.”

Cryderman agreed stating the community as a whole has been very supportive.

“We have a few people in the church who have been congregational support as well,” she added. “All my kettle spots have been filled, while the Knights of Columbus have also helped us out. We’ve also had great support from the community of Loon Lake. We had a kettle at their drive-thru Nativity event recently, which was supported very well. Goodsoil has also had a kettle in their community. Many local businesses have also been great – everybody has been a great support and really worked well together.”

Meanwhile, Eason – who along with his wife served as the local Salvation Army officer from July 2007 until late last year – said it’s a joy to still take part.

“It’s nice to still be able to support the good things that go on in the community, particularly the things The Salvation Army is striving to continue to do,” he said. “It’s our desire to continue to be a part of that.”

This was echoed by Campbell, who led The Salvation Army in Meadow Lake from January 1992 until July 2007.

“It’s important I help out, especially this year with COVID-19,” she said. “We’ve had a number of months here unlike any we’ve ever had. There are so many organizations that really can’t operate as far as having fundraisers. In the past few months we haven’t been able to have church suppers or Christmas bazaars, anything like that. These are ways organizations have raised funds to help those less fortunate.”

Campbell also said it’s been great to see the organizations that are able to do something come together.

“Since Glenna came in, she has done such a wonderful job,” Campbell continued. “I’ve been really impressed with her attitude, compassion and her ambition.”

This year, Campbell has primarily volunteered for kettle service.

“I also live in the high rise (Golden West Manor), and here we are having a raffle of home-baked goods,” she said. “I’ve been selling tickets for that. Yes, this year has been a different year, and those of us who can need to help the Salvation Army in any way we can.”