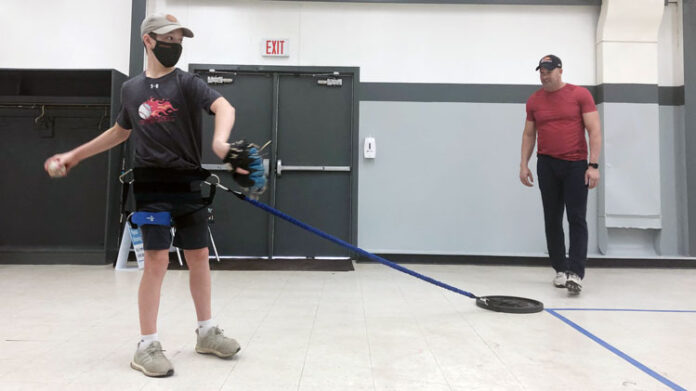 Quincy Winkler is excited to give back to the sport he loves.

Recently, Winkler – a lifelong baseball enthusiast from Meadow Lake – launched a new training program called Jettspeed Baseball. Named after Winkler’s son, Jett, the program allows minor baseball players both local and from afar the opportunity for one-on-one lessons with Winkler designed to help them develop elite-level velocity when it comes to their pitching as well as increased hitting power. And, each and every lesson is offered free of charge.

“I just don’t feel right about taking money for it,” Winkler explained. “My ultimate goal is to have a kid come back one day and tell me he or she was drafted or earned a baseball scholarship, and to thank me for the help. Some people might see it’s free and think it must be a joke, but I don’t care. I just enjoy sharing my knowledge and expertise.”

Winkler played four years of college baseball in Texas until injuries derailed his future plans and, for a time, drove him away from the sport. His interest in baseball was soon rekindled, however, and for the last 10 years Winkler has spent both the time and money to improve his skills by learning from some of the top pitching and hitting instructors in the U.S. Now, he said, is the right time to start sharing what he has learned with others.

“As I got a little older, I realized there was nothing left for me in baseball, but my son was born a couple of years ago and that really lit a spark in me and made me think about giving back to the youth,” he said. “We live in a remote area and the kids who play baseball here don’t have all the luxuries as the kids who play in Texas or other places where they can play baseball year-round. I would like to help develop the game in this area the best I can and give some kids from this area the same opportunity I had.”

Winkler went on to say his hope is to see more teams from Meadow Lake capture provincial championships or to simply make a name for the community so other teams realize Meadow Lake has some good ball players.

“Ultimately it’s them who put in the work and, so far, they have been pretty open to it,” he added.

In addition to offering one-on-one sessions at the mezzanine above the Meadow Lake and District Arena where Jettspeed Baseball utilizes radar guns, slow-motion video, spin rate, spin axis, bat speed and bat attack angle, Winkler also offers his services remotely. This means players send him videos of their training regime, he analyzes it and sends back a video of his own showing them where they need to improve. This, Winkler said, is beneficial to players from out-of-town as well as anyone concerned about attending in-person because of COVID-19.

According to Regan Beck, president of Meadow Lake Minor Baseball, the service offered by Winkler can be of great value not only to the kids who take part but to the organization as a whole.

“It certainly is appreciated,” Beck said. “Any time we get the opportunity to see these guys come out and give back and try to help young players improve so they can reach their potential and one day achieve their goals is going to improve minor baseball as a whole. We see similar things on the hockey side with much more frequency than we do on the baseball side.”

Beck’s son, Reid, has also been taking part in training sessions with Winkler.

“Reid has been working with Quincy to improve his pitching,” Beck said. “Reid is 15… We’ve seen an increase in his pitching velocity. Reid has some goals of playing some higher baseball when he’s older and to do that you need to see some higher numbers on the radar gun.”

Winkler noted, in today’s game if players don’t possess elite velocity or extra base-hitting power they are probably not going to play baseball at a high level.

“If you, your son or your daughter are serious about throwing harder and hitting with power, now is the time to act,” he said. “Once the season begins, it’s too late.”