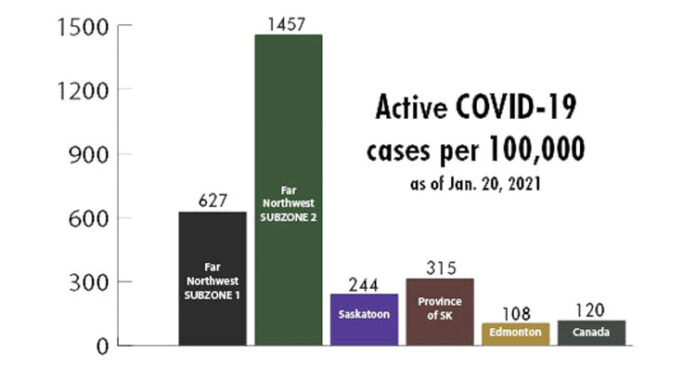 The upward trend when it comes to active COVID-19 cases in Saskatchewan, including the Far Northwest, is something more people need to take seriously.

This is according to Dr. Gavin Van de Venter, chief of staff at the Meadow Lake Hospital, in the wake of the latest numbers reported by the province which currently show 3,928 active cases throughout the province as of Jan. 20.

“Saskatchewan has the highest rate of active cases per 100,000 people in the country at the moment, and by that I mean it’s significantly higher than other parts of Canada,” Van de Venter stated. “Our discipline is by far the weakest.”

“Our area is – and we have been for a while – the worst in the province,” Van de Venter continued. “Our reproductive rate (for the virus) is higher than a four whereas other places are at two or three, and that is why our area was selected first to receive the vaccine. Things are getting worse, they’re not getting better.”

Meanwhile, the ongoing COVID crisis has resulted in a disruption of obstetrical services at the Meadow Lake Hospital, a disruption that will remain in effect until further notice.

“Out of an abundance of caution, the unit is being closed following a COVID outbreak on the surgical ward which utilizes many of the same staff as obstetrics,” noted a recent Saskatchewan Health Authority news release. “The hospital continues to perform day and emergency surgeries, but is not performing routine inpatient surgeries at this time.”

There was also a recent outbreak at the long-term care facility in Loon Lake. According to the SHA, 12 of the 18 residents at the facility have tested positive as have four workers, but everyone willing to receive the vaccine has been vaccinated and the SHA feels the outbreak is under control.

“We need to continue to do our part when it comes to social distancing, staying in our own bubbles and not going ahead and visiting with anyone and everyone – we need to keep doing what we all have been or should have been doing for what seems like forever now,” stated Loon Lake mayor Brian Hirschfeld. “One case is bad enough let alone something like this.”

Van de Venter, meanwhile, said there are still numerous misconceptions when it comes to both COVID-19 and the vaccine.

“People are saying, ‘But hey, the vaccine is rolling out so everything should be OK,’” he said. “However, what people need to understand is the vaccine prevents people from becoming sick. People mustn’t confuse infection with getting sick. The vaccine will prevent you from getting sick, but it doesn’t mean you still don’t have the virus in you. You can still get the virus, you just don’t get sick from it once you’ve had the vaccine. But, you can still get it and you can still spread it to people who are not vaccinated yet. That’s why we need to continue with social distancing, hand-washing regardless of whether you’ve had the vaccine.”

Van de Venter also said he is worried about the fact a good number of people in the area who could receive the vaccine now have chosen not to do so.

He also said the rollout of the vaccine is dependent on the number of vaccines the government receives.

“But, the rollout is inconsistent,” he added. “We just don’t know when the vaccines will arrive. We have a ballpark figure, but the government itself doesn’t know. They’re going as fast as they can, but there is only so much you can do.”

Van de Venter did note, though, there shouldn’t be an issue with people who have already received their first dose to be able to get their second on the suggested interval of 28 days.

“They have promised us we would have it on time and so far they have delivered,” he said. “We will have to wait and see.”

Van de Venter also reiterated a point he made recently about not buying into conspiracy theories.

“People are going to hear horror stories about the vaccine on social media,” he stated. “Nobody will say anything about the 10 million people it has helped, only the 10 people who have a major reaction. I encourage people to not be swayed by social media from doing what is right. Taking the vaccine is not only for your own good but, to me, it’s a form of public service and a form of showing solidarity, care and love for your neighbours. The same goes for social distancing and wearing masks.”

So far, he added, there have been no reactions to the vaccine in Meadow Lake and area recipients.

“It’s been pretty successful, so we’re really confident in it,” he said. “Our aim is everybody gets it and we get to the point where we have a walk-in clinic where everyone can come in and get vaccinated. It’s just a matter of the vaccine being available more readily throughout the province.”