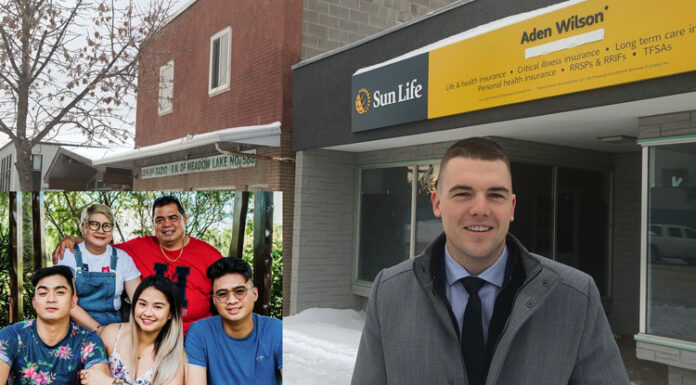 Later this year, local resident Vanessa Bulao plans to open a new restaurant at 225 Centre St. – the former RM of Meadow Lake office – which will serve both Filipino and western cuisine. It’s a plan Bulao said has been in the works for a while.

“We moved here in 2009 and we also ran a business back home (the Philippines) where we would cook food and sell it,” Bulao said. “When we moved here, my mom started working at the Nor’Wester, but we’ve had the idea of opening our own restaurant for about the last five years.”

The restaurant, which has yet to be given a name, is expected to open this summer.

“We’re doing some renovations to the building, as well as to the upstairs,” Bulao explained. “But, because of COVID-19, everything has slowed down. I bought the building from the RM (now located on Highway 4 next to Four Seasons Motel).”

The global pandemic, however, continues to be a concern, Bulao added.

“COVID is still kicking and I don’t want to open the restaurant while the pandemic is ongoing,” she said. “That wouldn’t make much sense. It’s going to be hard enough for me and for my mom, as she will be the one working here full-time. My brothers will be working here too. It’s my business, but I wouldn’t be able to do it without them.”

Meanwhile, the building’s upstairs – which housed the local CJNS radio station since 1977 – is being renovated into a two-bedroom suite.

“We’re almost done with it and, hopefully by February, we can start renting it out,” Bulao noted. “They (Jim Pattison Broadcasting Group) have stations in North Battleford and Prince Albert. Before I bought this place, they already told me they would be downsizing and I knew the local employees would be moving out.”

The restaurant won’t be the only new businesses opening downtown in the near future. Next door (223 Centre St. – the old Albert’s Men’s Wear store) will soon be occupied by a Sun Life Financial office managed by advisor Aden Wilson.

Wilson, who has been working for Sun Life for four years, moved to Meadow Lake from Saskatoon about a year ago. Since his arrival, he has been primarily working from home.

Wilson went on to say he looks forward to opening his office, something he said should happen in the next two months.

“It would have been great if I could have started shaking hands and meeting people in person right when I got here, but COVID-19 really presented a challenge for the type of work I do because our business is heavily focused on relationships and trust,” he said. “I find it’s a little bit trickier to build relationships when you’re talking through a computer.”

The pandemic, however, and the need to renovate the downtown building is what resulted in the delay.

“We’re just starting to finish up the renovations at the building,” Wilson said. “We did a full gut of the building. We started with a blank slate and rebuilt everything. The intent is to have that as my building but to also have some extra office space in there which people could rent.”

In the meantime, Wilson said he is excited to be part of the Meadow Lake business community, as well as Meadow Lake as a whole.

“I’m a big sports guy, especially when it comes to basketball and volleyball,” he added. “And, I’m really excited to get some things rolling on the side for people in the community.”

Bulao is also excited for her latest endeavour to take off.

“I’ve been here 11 years and I have seen people come and go from the downtown,” she said. “It’s sad when a business has to close down, but, fortunately, there is always an opportunity for someone else to open a new business in its place.”

According to Trevor Dignean, the administrator for the Meadow Lake and District Chamber of Commerce, the arrival of these businesses as well as others down the line continues to bode well for Meadow Lake’s economic future.

Dignean went on to say, however, he sees a lot of potential for even more businesses to establish themselves in Meadow Lake.

“Businesses here seem to be very resilient compared to other centres,” he said. “There are other communities that have really struggled, and we haven’t seen that as much.”