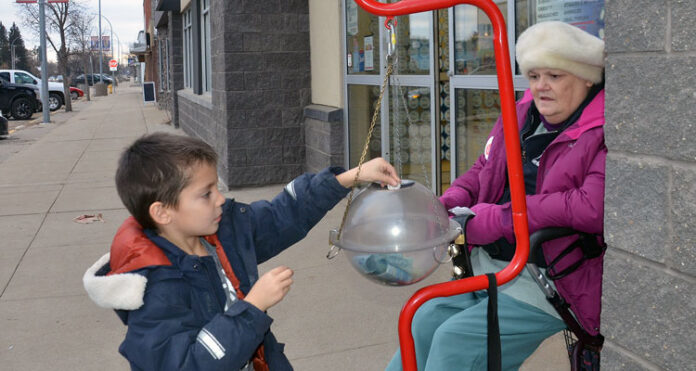 The kettle was burning hot for the Salvation Army in Meadow Lake during the recent holiday season.

However, Cryderman said special donations were down slightly in 2020.

Cryderman believes the increase in kettle donations in 2020 was the result of people simply being more generous.

“What also helped us out this past Christmas was the Nativity drive put on by the churches in Loon Lake,” she said. “They allowed us to put a kettle there which brought in a fair amount of money, and Goodsoil also had a kettle there. These outlying areas were willing to come on board because they felt, because of COVID-19, we could really use the extra support.”

At the same time, however, the Salvation Army in Meadow Lake had fewer families and individuals apply for a Christmas hamper compared to past years.

“We were down by about half compared to the previous year,” Cryderman noted. “I really don’t know why this was the case. I was also amazed by the fact more people than the previous year failed to show up to collect their hampers. I’m wondering if some people are perhaps still receiving CERB money and that made a difference, but I just don’t know. I expected requests to be doubled this year because of how rough 2020 was for so many people.”

Cryderman went on to say it would not be fair to say the need no longer exists in the community as much as it has in the past, as need comes in many forms.

“It just varies year-to-year,” she said. “But, one thing that really helped this year was the over-the-top effort by Red Apple to collect toys. We also received a cash donation from them. The community has always come together, but came together in different ways this year.”