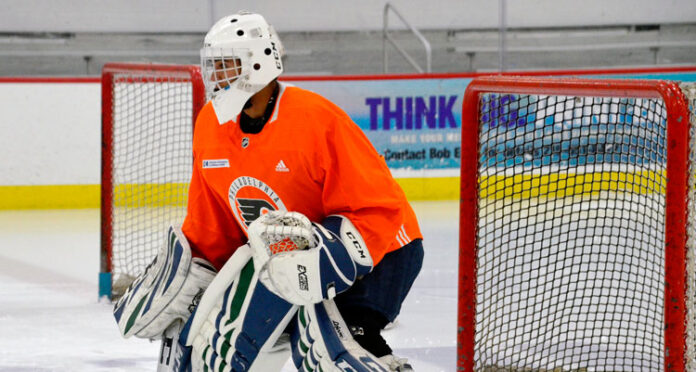 Canoe Lake Cree First Nation’s Roddy Ross has taken another step toward realizing his dream of one day competing in the National Hockey League (NHL).

Ross, who was a sixth-round pick by the Philadelphia Flyers in the 2019 NHL Entry Draft, was one of 41 athletes to recently take part in a six-day Flyers’ training camp which ultimately saw him land a spot with Philadelphia’s farm team, the Lehigh Valley Phantoms of the American Hockey League (AHL). The camp kicked off Jan. 4 and involved on-ice workouts and more. Of the 41 participants, 23 were named to this year’s Flyers’ roster.

“We just had the Philadelphia Flyers’ training camp – it just finished up a few days ago,” Ross told Northern Pride.

The 20-year-old goaltender described the experience as intense.

“It’s a really different league over here,” he said. “It’s very professional, yet you have everyone battling for a spot. It was certainly intense both on and off the ice, but it was a really good environment to be in.”

In the first half of 2020, Ross was traded to the Regina Pats of the Western Hockey League (WHL) after earning MVP honours for his efforts with his previous team, the WHL’s Seattle Thunderbirds. The COVID-19 pandemic, however, resulted in little to no ice time for Ross since the trade took place.

Meanwhile, as the pandemic continues, it has yet to be determined if and when there will be a WHL season this year. Ross said, if there is, he will likely return to Regina to fulfil his junior hockey commitment. If not, he said he is content to remain with the Phantoms who are based in Allentown, Pennsylvania.

“I felt really good about how I did at the camp and where I ended up,” Ross said. “I’m happy to make the farm team because it’s part of the journey of making it to the NHL. This is another big step and it’s really exciting. If we do have a WHL season, I think I will be rejoining my team there. If that doesn’t work out, I’m pretty sure I will stay here with the AHL and, hopefully, that will be a really good experience and a chance for me to prove myself and that I can play at the pro level.”

Ross also said the details pertaining to a 2021 AHL season are still up in the air, noting, however, it’s most likely the schedule will go ahead.

“The next step for me is to continue training here, skating every day with the AHL group until we have a more definitive date as to when we can get back to playing hockey,” Ross said. “It’s great to be skating with a bunch of guys who are all pro athletes… they’ve been through the experience, through all these camps – some more than once – and to see how they battle and compete really shows what it’s going to take to make it at the pro level. I just look forward to the opportunity to continue my journey toward one day playing in the NHL.”