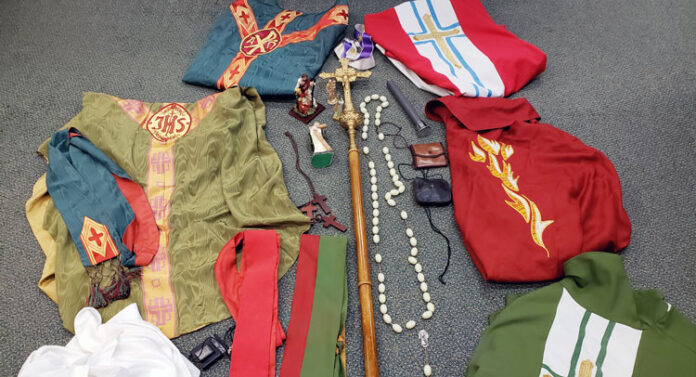 Thou shalt not steal.

This is a lesson Dean Chartier of Buffalo Narrows may have to learn the hard way following his arrest Monday (Feb. 15). Chartier is charged in connection with a break-and-enter to the Church of St. Leo the Great. The break-in was reported to the RCMP Feb. 14 at 10:25 a.m. by David Seright, lay minister at the church.

“I came in early that morning to get things ready – to check the heat and make sure everything was ready to go,” Seright told Northern Pride.

Upon his arrival, Seright did notice the door to the church was not fully closed, but did not initially become concerned.

“The door was ajar, but I assumed the priest (Fr. Ramu Polimetla) who lives next door and who was off to Ile-a-la Crosse that morning for mass had come in to check the heat before he left and didn’t quite pull the door shut,” he said. “As soon as I walked into the church, however, I noticed the tabernacle was missing.”

A tabernacle is an ornamental locked box used for reserving the communion hosts.

“That’s when I looked around and saw other things were missing,” Seright added.

According to the RCMP, in addition to the tabernacle, other items missing included chalices, robes, crosses and other religious artifacts. Meanwhile, some items were not stolen, but instead simply damaged.

“There were some porcelain crosses and whatnot that were broken,” Seright noted.

Seright also said this isn’t the first time the church has been broken into, recalling an incident from a number of years ago.

“It was quite a few years back when someone went in, but I don’t know what they took,” he said.

Many of the stolen items from this week’s break-in, however, were recovered prior to the police even being made aware a crime had been committed.

“We have a big sort of barrel where we keep the holy water,” Seright explained. “It was pretty much empty, so he (suspect) apparently threw everything in there and dragged it away. Looking outside, you could see where he dragged it off. I followed the track across the street, behind the Friendship Centre and eventually into the cemetery. There is an old building in the cemetery with no door where they used to keep the shovels and other things. I found the bin and many of the stolen items in there. I hauled it back to the church and that’s when I called the police.”

Meanwhile, a subsequent investigation led police to conduct a search warrant at a home in Buffalo Narrows the following day. Numerous religious items were also recovered during the search including crosses, robes and other artifacts from the church. As a result, Chartier, 49, of Buffalo Narrows was charged with break, enter and theft as well as other offences, and will appear in Buffalo Narrows court April 14.

“I don’t know if he is crying for help or crying for attention, but he needs help,” Seright said. “All we can do is pray for this fellow.”

A break-in was also reported Feb. 13 at Our Lady of Peace Roman Catholic Church in Meadow Lake. Police report a set of golf clubs was stolen from the parish office.