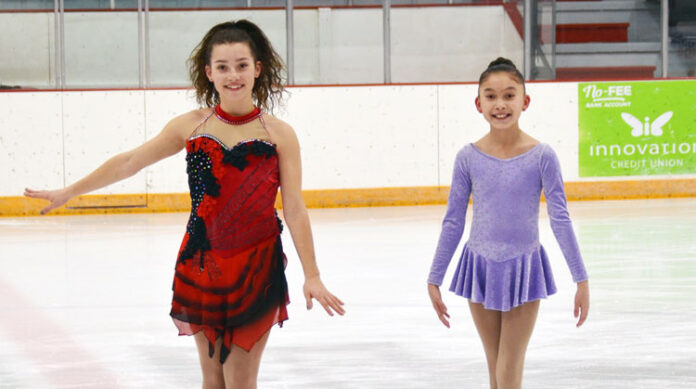 Two athletes from the Meadow Lake Skating Club still had a chance to showcase their skills at the provincial level in spite of COVID-19’s best efforts to put a stop to actual competitions this season.

Recently, skaters Sadie How and Briseis Leskowski competed in the 2021 Saskatchewan Virtual Cup.

“This is essentially our version of provincials for this year,” explained skating coach Janelle Roenspies. “We sent in professional video recordings of the girls’ performances, and, last weekend, they streamed the videos on the Skate Canada website. Judging took place, and the skaters were ranked. Both girls did really well.”

According to Roenspies, the format of the competition was much different compared to what the skaters are used to during a regular year.

“The girls didn’t actually care for it because they missed out on the whole atmosphere you tend to get at an intense competition when there are 200-300 other skaters there, and judges actually in the same room as you,” she said. “They didn’t experience the same nervousness they normally would, which can usually push them to do better as they are both pressure skaters. The nice thing is we didn’t have to travel because these events are usually held in the southern part of the province. We only had to spend about three hours at the rink instead of three days on the road, which is nice.”

As for preparation, however, Roenspies said it was pretty much the same as in past seasons.

“They had to spend so much time on each element in their program and perform so many run-throughs for the last few weeks before the competition,” she said. “Their headspace has been a little different this year, however, because they normally would have had about three competitions before this one, but this is the only one they had this year.”

As for the season overall, Roenspies said club registration was down.

“We had lower numbers,” she said. “But, as such, it didn’t require as much adjusting as we normally would have had to do. Still, we had to cut back a little bit. We could have only eight skaters on the ice at one time, and we cut our junior program in half – junior girls received only about half the ice time they normally would get, but as far as our older girls go, they got close to the same amount of time as normal but there isn’t as many people on the ice.”

This was echoed by How’s mother and club co-president Christa How.

“This year was definitely different,” How said. “With the (COVID-19) restrictions, we had to cut the hours each group had on the ice and split them up. CanSake numbers were quite small this year compared to other years, and, around the New Year, masks came into effect. Our girls managed quite well, though. We were really thankful our girls could still skate as there were so many organizations that could not run their sports. We are very thankful to have had some ice time even though it looked much different.”

According to Roenspies, COVID restrictions also meant the skaters had set spots where they had to put their skates on, while they also had to arrive at the rink dressed in their skating gear and ready to go.

“Luckily this is an individual sport, so they are not going around each other too much anyway,” she said. “But, they haven’t been able to attend seminars or competitions, all the stuff that allows them to bond as a team.”

Roenspies, however, is optimistic for next season.

“We normally have a competition Thanksgiving weekend, and we’re hoping things will clear up in time for these two girls (How and Leskowski) to be invited to that one,” she said. “We’re also supposed to normally be in carnival season this week, but instead there will just be a fun day at the rink this Friday.”