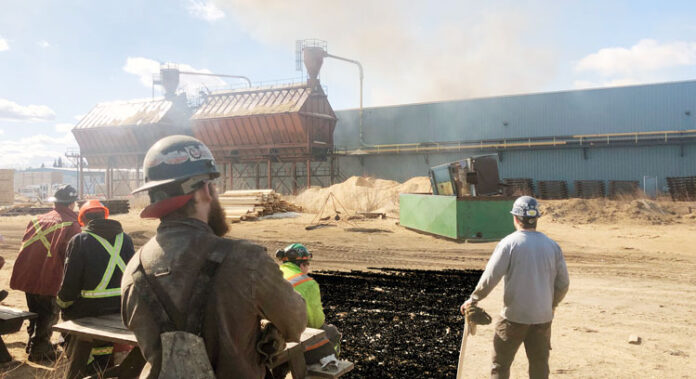 Production has slowed, but will not completely stop at NorSask Forest Products east of Meadow Lake following a weekend fire.

On Saturday (March 27) at approximately 11:40 a.m., a fire broke out at NorSask, originating near the control room for kilns one and two.

“The integrity of the sawmill itself is still at 100 per cent – it was just the two kilns that were impacted,” explained Al Balisky, president of Meadow Lake Tribal Council Industrial Investments, the company that oversees NorSask. “All sawmill/planer mill equipment assets were unaffected by the fire – the fire only resulted in the loss of kilns one and two. Fire damage also occurred to the west wall of the sawmill stacker building.”

There are a total of four kilns at NorSask, so the two that were unaffected by the fire will be used going forward. Meanwhile, the two that were impacted will be replaced with a new kiln system within the next few months.

“All lumber producers use kilns to dry lumber to a required benchmark moisture content – typically 15-20 per cent moisture content for use in residential and commercial construction,” Balisky said. “There is also a need to ‘heat treat’ lumber to kill pathogens prior to export. This ensures bugs and other pests are not transported internationally.”

The sawmill and planer mill are ready to start back to full production again as soon as the area is determined to be safe for work. Balisky also said cleanup at the site as well as repairs to the stacker building are underway this week.

“The hope is to be back up and running as quickly as possible,” he added.

Along with NorSask staff, employees and maintenance contractors, firefighters from various departments also assisted in the fire suppression efforts. The fire was extinguished by early Sunday morning (March 28).

Meanwhile, the exact cause of the blaze remained under investigation as of this week’s news deadline.

“The fire at the mill was large, and had the potential for much greater damage than did occur,” stated Meadow Lake fire chief Neil Marsh. “The mill’s own employees worked very hard to contain and control the blaze, along with fire crews from Meadow Lake, Loon Lake, Glaslyn and the Saskatchewan Public Safety Agency.”

Balisky said MLTCII is relieved there were no injuries to any NorSask-affiliated staff, employees, contractors or firefighting personnel.

“NorSask management is deeply grateful to the various fire departments that assisted in the fire suppression effort,” he said.

Balisky went on to note this appreciation is extended to all NorSask employees and the many others who assisted during the fire.

“We are very grateful for their efforts,” he said.

This is the second major fire at NorSask in four years. However, Balisky confirmed the recent incident was much less serious than the blaze that occurred Jan. 12, 2017 in the debarker/slasher deck of the mills infeed area. The damage caused by that fire was significant to the point several NorSask employees were temporarily out of work until the infeed area could be rebuilt.

Meanwhile, earlier that same day, Meadow Lake Fire and Rescue responded to a fire in a mobile home at 620 2nd Ave. East, which was fully involved on their arrival. It was unoccupied, and no injuries were reported.