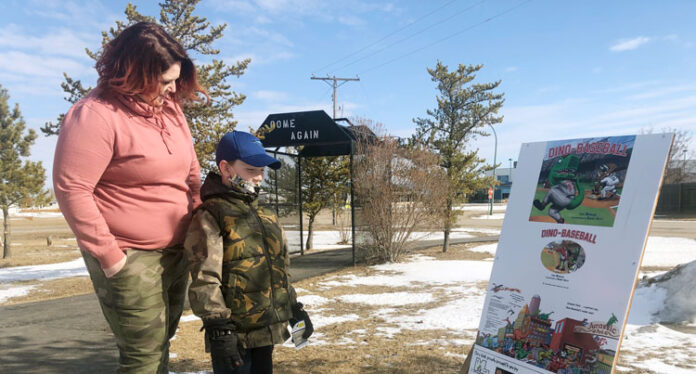 Lions Park has a story to tell.

Recently, the City of Meadow Lake’s parks and recreation department – in partnership with the school community councils at Lakeview Elementary, Jubilee Elementary and Kopahawakenum School, as well as with donations from Kelly Graphics and North West College – established what is known as the Lions Park Story Walk.

“You see things like this in a lot of urban centres nowadays, and what it basically boils down to is a story being told throughout the park,” explained parks and recreation manager Regan Beck.

At the entrance to the park and throughout the route of the walking path, the city has installed eight pedestals which hold “pages” of a book, reprinted on signage boards. The pedestals were crafted by the carpentry program at North West College, while Merlin and Barb Seymour of Kelly Graphics provided the signage boards.

“The first story we have at the park is titled Dino-Baseball (by author Lisa Wheeler),” Beck continued. “We were able to secure the rights to display this story in the park, and chose to reprint each page on signage boards mainly because of the weather we experience here in Meadow Lake. As you come into the entrance of the park, you’ll see the cover and a little background on it, and then, as you continue down the path, you’ll come across another page or two. By the time you complete the entire big loop through the park you will have read the whole book.”

According to Gordon Whittle of the Lakeview Elementary SCC, it was his group that came up with the idea for the Story Walk, and approached the city to see if it could be done.

“The Lakeview SCC is always looking for ways to encourage family engagement, and to build relationships by getting people involved any way we can,” Whittle said. “The Story Walk is an idea that came together at one of our meetings back in the fall… we thought it would be a good way for the school community to get out, be visible, to connect and to share some experiences. It was nice it also promotes physical activity and literacy at the same time. It was an exciting idea, so we approached Regan with this initiative and it sort of took off from there.”

Beck, meanwhile, said the plan for this year is to secure the rights to at least six stories, which would be cycled through the park every couple of months.

“My goal for next year would be to fill things in and to change the story monthly,” Beck added.

Beck also said, when the Lakeview SCC approached him with the Story Walk idea, he then reached out to the other local schools as a way of promoting inclusiveness.

“They all thought it would be great, and things just went from there,” he said. “There was very minimal dollars involved overall, but we are splitting the cost, and it gives an opportunity for kids, students, adults, everyone to go out there and see the book, and it adds another little feature to the park.”

Dino-Baseball was installed at the park at the beginning of March.

As for Whittle, he described the entire initiative as “fantastic.”

“It’s exciting to see so much support from around the community,” he said.