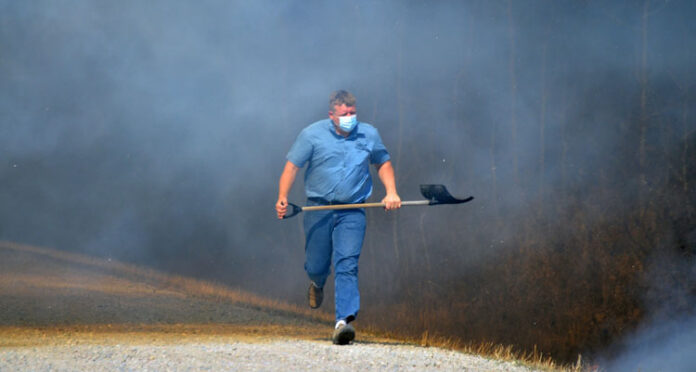 For close to 45 years Irvin Beaudry has helped the people of Rapid View in whatever way he could. Now, the community of Rapid View is doing its part to help him.

Beaudry, 81, lost his home Friday (April 16) when a grass fire which began at a property just northwest of his Rapid View acreage quickly spread, destroying Beaudry’s home and out buildings, as well as causing severe damage to other neighbouring properties.

Beaudry, who lived alone, was not home when the fire initially broke out.

“He had taken a neighbour to town for an appointment,” stated Beaudry’s niece, Joanne Dallyn. “He’s famous for driving people around. He took her to town, then took her home and, normally, he would have then gone home to take a nap. That’s normally his routine. In this case, however, he had ordered something from NAPA which was supposed to be in that afternoon. So, he decided to go back into town to pick it up. When he was there, he saw the fire trucks heading out of town.”

On his drive back to Rapid View, Beaudry could see the smoke in the distance and thought perhaps the local landfill site had caught fire. As he got closer, however, he realized the fire was beyond that – on the other side of the river in fact – and soon realized it was his house that was on fire.

“He lived there for about 45 years – ever since he built the house,” Dallyn added. “Last summer he even did a number of renovations because he wanted to make the house last. He just finished those renovations when lo and behold.”

Since Friday, Beaudry has been staying with his sister as he attempts to get back on his feet. According to Dallyn, he had no insurance on his home which makes the situation even more difficult than it normally would be. However, she also said the outpouring of support from friends and neighbours has been fantastic.

“Rapid View is a very close-knit community,” she said. “Lots of them have given him money and offered him things to help get him set back up. The Red Cross gave him a small emergency fund to help him get going, and our daughter has set up a GoFundMe page.”

Beaudry, meanwhile, said the support he has received has been nothing short of tremendous.

“It’s been really, really good” he said. “Everyone has been so generous, and it will be a big help because I had no insurance.”

As of yesterday, $12,740 had been raised through the GoFundMe page.

Marsh also confirmed the damage from Friday’s fire was not limited to Beaudry’s property alone. In addition to his home being lost, another home was damaged, and numerous outbuildings, vehicles, RVs and other items were either lost or damaged. This was reiterated by Dallyn.

“The fire department arrived just in time to put out the fire at my cousin’s house next door, but the siding is melted,” she said. “The fire went through Irvin’s, along the backside of my cousin’s house, took out their sheds, lean-to, barn and their dad’s Monte Carlo which they were restoring, then jumped to the neighbour, Brent Moore’s property.”

This is where firefighters were finally able to stop the blaze before it grew even worse.

Busy week for firefighters
Meanwhile, in response to what has been a very busy week for the local fire department, both the City of Meadow Lake and the RM have announced fire bans.

In addition to the Rapid View fire, Marsh said his crews also responded to a structure fire April 14 at the residence of Albert and Harmonie King in Dorintosh. The cause of the fire was accidental, and the building – which belongs to Mary Ann Schwartz – will require significant repairs. The following afternoon, firefighters were on the scene of a structure fire at Bradley Dyck’s farm on Cabana Road. A garage burnt down, and the fire spread to an adjacent wooded area.

“This time of year, grass and brush fires are especially difficult to contain,” Marsh said. “The land is often too wet for fire department vehicles to drive on, but the grass and surface fuels are very dry and burn quickly. Everyone is urged to be extra diligent in the conduct of all outdoor activities, especially in dry or windy conditions – even if no fire ban is in place. Fires are too often caused by the burning of garbage or spring yard rakings, or by the hot exhaust systems of quads and other off-road vehicles.”

Marsh encourages city residents to dispose of yard waste at the local compost site, and also reminds the public the use of fire pits, fireworks and other sources of ignition are forbidden during the fire ban.

As for Beaudry, Dallyn said, at 81 years of age, she doesn’t think rebuilding is an option.

“But, he has lived there for 45 years and is part of the fabric out there,” she said.

Beaudry himself said he is still uncertain as to what his next move will be.

“I’d like to stay in Rapid View, but right now I don’t really know what will take place,” he added.

Anyone looking to make donations to Beaudry can do so at one of two drop-off locates – Solitude in Meadow Lake and Alcott Embroidery in Rapid View.