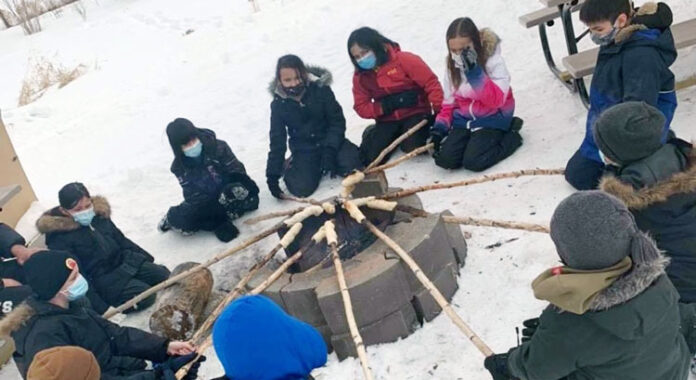 Métis pride is as strong as ever at Rossignol Elementary School in Ile-a-la Crosse.

From March 22-26, Rossignol Elementary hosted its annual Michif Culture Festival, an event – as the name suggests – that celebrates the community’s Michif language and culture. This year, however, COVID-19 called for things to be a little different than in the past.

“Most of it was virtual this year,” explained Rossignol Elementary vice-principal Krissy Bouvier. “We reached out through social media. Each night we had different Facebook family challenges. For example, there was introducing yourself in Michif, there was animal calling, one night was jigging, another night there was a sharing of traditional recipes and the final day was a Michif pride day where students shared photos of themselves and their families rocking their Métis attire.”

“Each day, classes went out and learned to make bannock on a stick with local elders,” Bouvier added. “We had traditional meals while classrooms also did Métis art projects such as beading and dot art and showcased on social media. But, again, a big part of the entire week were the family virtual cultural challenges.”

Bouvier went on to say the goal, through reconciliation and reclamation, was to honour and understand things that may not be as prevalent in everyday life as they were in the past.

“It’s our way of taking some of these things back,” she said. “It was heart-warming to see so many of our families involved at home, and the learning that was taking place at home. We’ve really worked on rebuilding culture and language into our schools, and to see it is also happening at home is so nice. It’s about relearning, about instilling pride and laying that foundation as to who we are as Michif speakers and as Métis people… that foundation is crucial.”

About 150 students took part in the various activities throughout the week. Come next year, however, Bouvier hopes COVID-19 will not prevent as many in-person events as it did this year.

“We’d love to have our families in and have that connection,” she said.