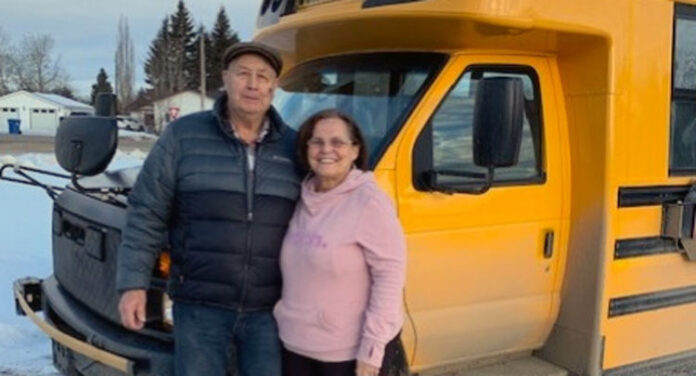 After more than four decades on the job, the careers of two school bus drivers in Loon Lake have slowed to a halt.

Earlier this year, husband and wife drivers Ken and Pat Prosser officially retired from busing students to and from Ernie Studer School. The couple began their careers 44 years ago, at a time when all school buses were contracted by the school division and, by the time they officially stepped down in March, they were the only contracted bus still in operation.

“We were going to retire in June because our contract was up and we weren’t going to renew it,” Pat Prosser explained. “But, with all the extra precautions because of COVID-19, and all the worry, we felt we should retire a few months earlier. We’re both older, and so we thought it was probably best for us to leave now.”

When the duo began transporting students, it was Ken Prosser who did most of the driving, while his wife served as a backup driver. After he moved into a maintenance role, Pat Prosser took over the route full-time. The entirety of their tenure involved driving students to and from ESS.

“The route extended somewhat over the years,” Pat Prosser said. “It always included the farm kids, but some years it went all the way to Ministikwan and we transported kids from the Loon Lake reserve (Makwa Sahgaiehcan First Nation) for a while too.”

“He owned the bus first, and when we moved here and started ranching, Harry asked us if we would like to start driving bus,” Pat Prosser recalled. “Back then, that’s all you did. You bought the school bus, transferred into your name and away you went.”

As for the memories they will always cherish and the part of the job they will miss most of all, the Prossers agree it will be the time spent each day with the children.

“We enjoyed the kids,” Pat Prosser said. “There are so many stories we can tell.”

“We hauled the kids, and later we were hauling their children,” he noted.

As the years went on, however, Pat Prosser said the job became more demanding in terms of what was required.

“The rules would change,” she said. “Everything was one way, but every year things would get more and more strict… more book work, more paperwork, but we had a lot of good years, a lot of laughs. We wouldn’t have done it for so long if we didn’t enjoy it.”

Following the Prossers’ retirement, the school division took over the route and did not re-contract it. The new driver is Loon Lake’s Nicole Waugh and Pat Prosser has some words of wisdom to pass along to her replacement.

“You’re better to get to the school late if it means driving slow and careful, and listen to the kids because they have a lot of great stories,” she said.

Among those who has known the Prossers for many years is ESS principal Brad Freyman.

“I wish to congratulate Ken and Pat Prosser on their retirement and thank them for the years of dedication to the families on their route,” Freyman noted. “After 44 years and 16,000-plus bus runs to and from the Whelan area to ESS, Pat made her final run March 10. Congratulations on a well-deserved retirement.”

As for their retirement plans, the Prossers look forward to travelling again once COVID-19 is under control.