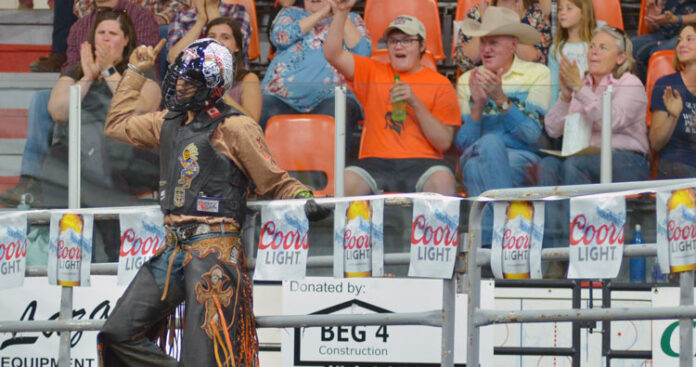 Meadow Lake’s Cody Coverchuk has returned to the sport he loves after recently being reinstated by Professional Bull Riders (PBR) Canada following a suspension dating back to 2019.

“I’ve only gone to two events so far this season – I’ve been taking things easy, easing back in to it,” Coverchuk explained. “I was just recently reinstated by the PBR, so I went to Prince Albert June 10 and 11.”

Whether he was rusty or just down on his luck those days, Coverchuk went 0-3 at the Prince Albert event, being bucked off all three of his rides.

“I just fell off right before the whistle each time – at about 7.7 seconds, so it is going to take a little bit of adjusting to getting back on the bulls again,” he said.

Coverchuk also competed at a Bull Riders Canada (BRC) event in Kyle, SK the weekend prior where he finished third overall.

“I was 84.5 in the long round, but I ended up going down just before the whistle in the short round,” Coverchuk continued. “Usually around this time of year, I’ve already been on about 60 different bulls at competitions… my numbers are way down.”

The bull riding season is slightly behind schedule this year, Coverchuk added, because of COVID-19 restrictions.

“PBR went last year, and only had minimal events which I missed out on, but I am looking forward to things getting back to normal this year and hopefully get back to winning.”

Coverchuk won the 2018 Professional Bull Riders (PBR) Canada Championship, punctuating the fiercest title race in the organization’s history. Although he remains a PBR champion according to the record books, the organization suspended Coverchuk when criminal charges were brought against him in December of that year.

“It feels really good to be back,” Coverchuk said. “Bull riding is all about peaks and valleys and it seemed like it was a valley for a while – dark and cold. But, now I believe there is light at the end of the tunnel and everybody is really eager to get back to doing what we love.”

Meanwhile, during his time away, Coverchuk said he also kept himself prepared for the time when he could return.

“I go to the gym every day, so physically I am in shape, bit it’s more mentally for me,” he said. “Since I’ve been off, I have been really craving it and they always say the comeback is stronger than the rise, and I believe that will be the case.”