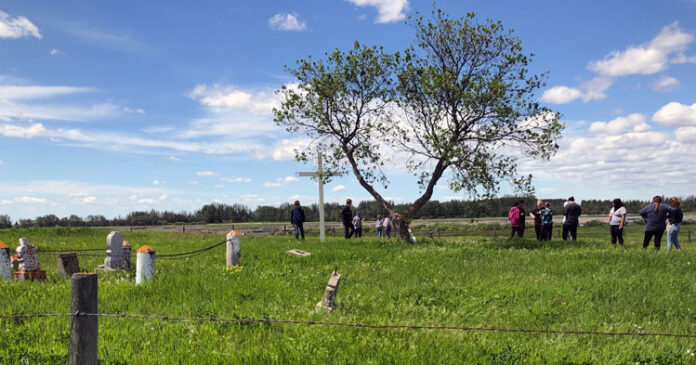 A recent outing by students at Carpenter High School in Meadow Lake served as a way of bridging generations.

Last Wednesday (June 16), CHS teacher Derek Eftoda and his History 30 class took their quest for knowledge beyond the classroom and into the community by visiting the historic Saint Cyprian Cemetery located on an acre of land near the golf course.

“The entire class is about Canadian history,” Eftoda explained. “I try to look at the country as a whole, but also find as many local events that connect to the big picture. We have been going chronologically, and right now are in the mid-1800s. I have been trying to tie the lessons to Meadow Lake by focusing on the first local settler, Cyprian Morin.”

The cemetery itself, which is accessible via 3rd Street East toward the Meadow Lake Golf Club before turning on to a narrow road opposite the clubhouse and winding past several private properties, was utilized between 1909 and 1942. It is believed to be the final resting place of close to 300 people.

“As a teacher, it’s most effective when you can present something to students that is relevant to their everyday lives,” Eftoda continued. “And, there are not too many times a student can look in the history books and literally see their ancestors there… that is what made this a cool opportunity to capitalize on.”

Based on information Eftoda has researched, Cyprian Morin arrived in Meadow Lake in 1873.

“It’s well understood and agreed upon he built his home and his fur trading post where the golf course clubhouse now sits,” Eftoda added. “He had a large family, and many of his family settled here… it’s a sort of who’s who of Meadow Lake names when you look at Cyprian’s offspring.”

Eftoda went on to say Morin donated a parcel of his land for the construction of a church and cemetery. The church no longer stands, however, while only some of the original grave markers remain with many of those in disrepair.

Meanwhile, as his efforts to research Cyprian Morin as well as the cemetery continued, Eftoda said he turned to Google Maps, city hall, Northern Pride, as well as local history books to gather as much information as he could.

“With COVID-19, we have been very limited in terms of the fun stuff we can do at school,” he said. “We’ve had to cut out extracurricular activities, and normally I would take my class to Batoche at the end of the year to learn about Métis history, but with the restrictions we couldn’t do that.”

The class met at the Meadow Lake Golf Club last week before walking over to the cemetery.

“It was a really special moment,” Eftoda continued. “The weather was beautiful, and the wind was incredible which kind of added to the whole experience. It was a gorgeous setting, and being sacred ground it seemed as though everyone took on a very serious, respectful tone… it was really neat… a feeling that overcame everyone.”

Among the group of students to take part was Evan Dymond.

“As someone relatively new to Meadow Lake, it was eye-opening to personally see the community’s history,” Dymond said. “I did not even know that cemetery existed until we went there.”

Eftoda went on to say more Meadow Lake and area residents should make an effort to learn about local history.

“It’s really important,” he said. “A lot of the people who built Meadow Lake and made it what is it are laid to rest there… Unfortunately, out of the 300 buried there, only about 20 tombstones are still visible. They are crumbling, while I believe many of the wooden crosses were lost to fire.”

And, while the site itself is not completely neglected, Eftoda said he would like to return with his students in an effort to conduct a cleanup effort.

“We spent that time out there, admiring the area and imagining what be like 150 years ago standing there,” he said. “It (cleanup) would be our way of contributing something.”