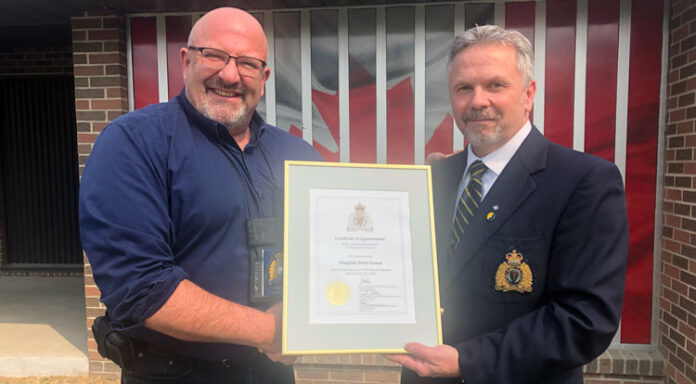 “It’s overwhelming, but profoundly meaningful to me and I appreciate it deeply.”

These were the words Meadow Lake’s Peter Eason used when acknowledging the large turnout of RCMP members both past and present, as well as other supporters who were on hand at the local detachment last Thursday (July 29) when Eason was formally brought on board as an RCMP employee. For more than a decade, the former Salvation Army major has volunteered his time as an RCMP chaplain, and now he has officially taken on an even greater capacity as chaplain for the RCMP’s north district.

“It is my pleasure to welcome with great pride, one of the kindest and competent people I know, a person I have the deepest respect for, who is a close friend, a brother in Christ and a faithful chaplain who has shown love, kindness and competent support to those in our organization, Peter Eason as the new north district chaplain,” remarked chaplain Tom McCullagh, RCMP ‘F’ Division chaplaincy/CISM coordinator. “Peter will continue to serve in the capacity he has served, but will also extend his care to isolated northern detachments that do not have easy access to in-person supports and across the north district. Peter will also provide support to our division as needed and a mentor to numerous detachment chaplains.”

This was echoed by Meadow Lake RCMP detachment commander, S/Sgt. Ryan How.

“I believe this position is the first of its kind in the province,” How said. “Peter has been a tremendous support for the RCMP for a decade and has done it all on his own time and expense. Peter has stood beside our members through some terrible situations and on more than one occasion has kept our detachment operational. He is very deserving of this and more.”

According to Eason, it was McCullagh who was responsible for recruiting him, as well as other chaplains across the division, adding – although his new position is a part-time one – its official nature will allow him to go to greater lengths to assist RCMP members in need.

“It’s all been volunteer work for me up until now,” Eason said. “That is all that was intended when it first started, and has been through all these years. Mental health issues have always been there, but – in recent years – there has been a greater realization of the need to address these issues… I believe we have seen a tremendous increase in the need for support in that way – not just mentally and emotionally, but spiritually as well.”

In 1984, Eason and his wife, Karen, began their training as Salvation Army officers. Over the next 33 years they served in various appointments that took them from Meadow Lake, to Maple Creek, Whitehorse, Yellowknife, then on to Winnipeg, Regina and eventually back to Meadow Lake where they continued to serve before their recent retirement.

“From my perspective as a former pastor here in Meadow Lake from 1996 to 2002 at the Meadow Lake Alliance Church, I know firsthand the work and services provided by the Salvation Army cadre and have witnessed the difference people like Peter and Karen have made without drawing any attention to themselves,” McCullagh added. “They have faithfully cared for anyone and everyone who were in need.”

In addition to Karen Eason, fellow RCMP staff as well as current members and representatives from F Division, last week’s appointment as also attended by former Meadow Lake detachment commanders Rod Ens and Tim Sartison. Eason, meanwhile, said he is looking forward to his expanded role. He also reiterated how important it was for so many people to show their support for him and his newest endeavour.

“It touched me very deeply,” Eason said. “The support I’ve received myself from our RCMP family is remarkable and is truly a blessing.”