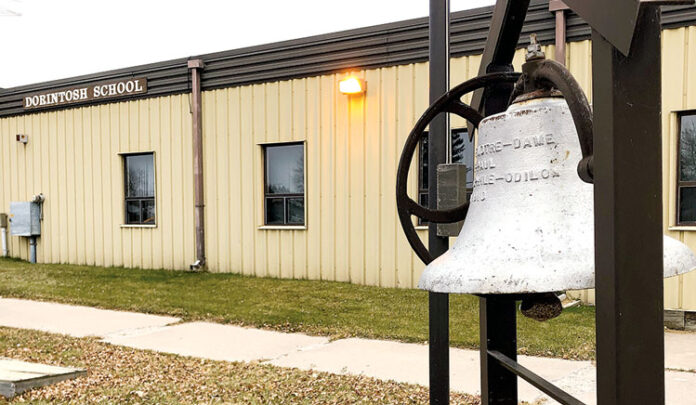 New life will soon be breathed into the former Dorintosh Central School.

While there are no plans to reopen a school in the community, efforts are underway to officially turn the building over to the village which, in turn, has been in negotiations with Meadow Lake Properties which intends to purchase the building and repurpose it in some capacity.

“The whole thing is in the hands of our lawyers at the moment, but, initially, when we first closed the school, the village told us they were not interested in the building,” explained Charlie McCloud, chief financial officer for the Northwest School Division. “However, a situation came up where Meadow Lake Properties expressed interest in obtaining the building and transforming it into a residential area. The village worked with Meadow Lake Properties for more than a year to hammer out the details – but there are a lot of details that require legal attention before things can be finalized.”

While the NWSD owns the school building, it does not own the land the school is located on. That land belongs to the village.

“The only option we had was to demolish it as our lease required, or turn it over to the village if they wanted it,” McCloud said. “With the interest shown by Meadow Lake Properties, the wheels are in motion – in fact they are well down the track here. We have an informal agreement in place with the village stating they will take possession of the building. Officially that hand off has not happened yet because there are many other things that need to happen on the village’s side. We also have to re-zone that area, which requires consent from Municipal Affairs.”

In spite of this, McCloud did note work is already happening at the school building itself, adding it’s simply the red tape that needs to be addressed to make everything 100 per cent official.

“None of this is official until all the documentation is completed,” he said. “From a school division perspective, we’re happy to see the building will continue to be used in some capacity rather than reverting it back to a green space. Hopefully it will benefit the community in the long run.”

In November of 2019, the NWSD board of education approved the permanent closure of Dorintosh Central School after the 2019-20 academic year because of a decline in student enrolment. This decision stemmed from a previous decision made in October of that year to proceed with a review of the viability of the school which, in its last year, served only 22 students.

“Obviously we don’t want to be in the business of closing schools – we are in the business of running them, so it took a great deal of thought and a long time to reach that decision,” McCloud said. “The decline in enrolment didn’t make it feasible to keep the school open. It was not a decision made on a whim. Community members were not pleased, but they did understand the need to do so.”

Northern Pride reached out to Dorintosh mayor Derek Osborne for comment on plans for the former school, but he was not available by this week’s news deadline.