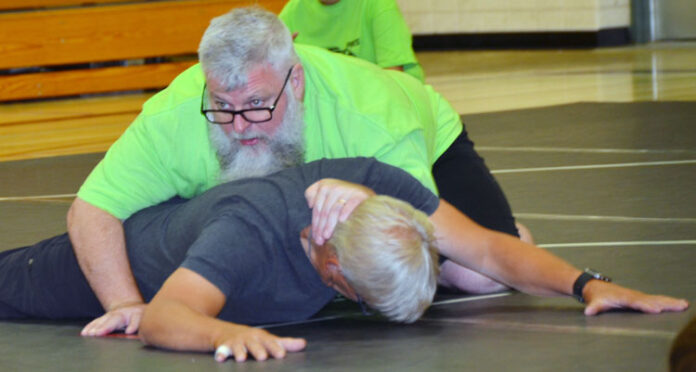 Even COVID-19 could not keep the Northern Pikes Wrestling Club down for the count.

Earlier this week saw the club join forces with the Meadow Lake SheDevils rugby team to host a three-day wrestling/rugby camp at Carpenter High School. For the Pikes, it’s the first major event the group has held since before the pandemic and, according to head coach Chris Brownrigg, its success goes to show both the popularity and resiliency of the sport in northern Saskatchewan.

“Rugby and wrestling are natural sports to combine,” Brownrigg said. “With the onset of COVID-19, we shut down the club because the restrictions made it impossible for our close contact sport to continue. With the lifting of the restrictions, we’re basically restarting the club from scratch. I am really pleased with the turnout we have had – we’ve got about 20 kids here this week.”

“I have been an RBC Olympian the past four years,” Fox said. “My role is to go around and promote healthy living, athletics and active living. This camp is great because they are mixing in everything you would need, not to necessarily be an amazing wrestler, weightlifter or rugby player, but to promote a good lifestyle and what you need to do to be healthy and successful at everything you do. It’s a great opportunity for the athletes to try a few new things before their respective seasons start, to have fun and to get some exercise. I have been super-impressed with how coachable they are – they are very receptive.”

Brownrigg, meanwhile, said the concept of a three-day, pure wrestling camp would likely be too much for the participants at one time.

“By having wrestling, rugby and weightlifting together, we break up the information we’re giving them, keep it interesting and try to make the sessions short enough they can absorb the information and not get overloaded,” he said. “Monday we had nutritionist Tammy Shakotko come in and give a great presentation on nutrition. She also taught the kids how to make a healthy lunch. We try to do things that are hands-on, so the athletes aren’t just learning with their eyes and ears.”

As for the Northern Pikes’ 2021-2022 season, Brownrigg said, in a perfect world, it should get started by mid-October. The SheDevils, meanwhile, plan to hold monthly events as part of a recruitment drive leading up to the start of indoor practices in February.

“We are fingers crossed the Delta variant is controlled and doesn’t end up closing down our season again,” Brownrigg added.