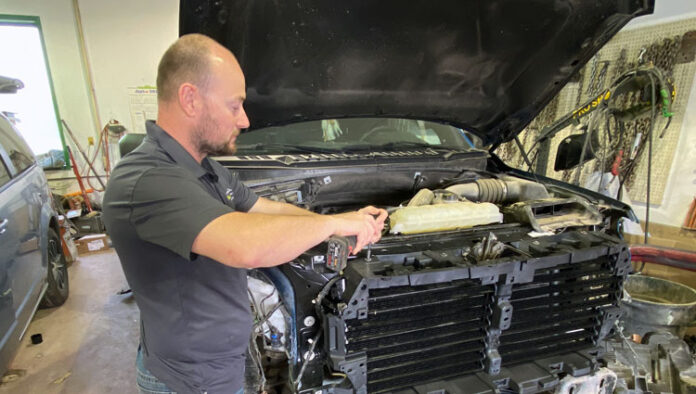 There’s a new head of the table when it comes to the day-to-day operations of a long-time auto body shop in Meadow Lake.

Jeremy Head officially took ownership of Curtis Auto Body – a fixture in Meadow Lake for more than four decades – June 6. Now known as Head’s Auto Body, the shop carries on the service and tradition of its previous owner.

“Neil was here for 42 years,” Head explained. “He was looking to sell for a few years, so I approached him. He was ready to retire and we were able to come to an agreement. I have been in the industry for about 20 years and managed another shop for about 10, and felt I needed to come out on my own. The goal I was moving toward ever since I started in the industry was to one day have my own place, and – after 20 years – I was ready.”

“We offer ArmorThane box liners, and I also have an in-house mechanic, so we also offer mechanical work in addition to your day-to-day auto body needs from deer claims to touchups,” Head added. “Business has been really good, and the community support has been awesome.”

Head also said it remains somewhat surreal to know he owns his own business.

“The fact it’s mine hasn’t really sunk in yet,” he said. “As for taking over an established shop in town, I’m hoping to maintain its reputation and to make it even better. I also need to thank the community. There has been really good support, and I didn’t think I would be this busy this fast.”

“Right now we’re in the midst of renovations, but we’re shooting for October as for when everything will be up and running,” King said.

Kingdom Golf will feature a series of golf simulators to allow golf enthusiasts a chance to hone their skills and to just have fun.

“We’ll have three GCHawk Foresight simulators coming in, so it will be virtual golf with pretty much the top technology the tour players use to get readings on their game, their ball and on their distance,” King explained. “It’s indoor, virtual golf, and it’s as realistic as possible. The facility itself will also have a small kitchen with more of an appetizer-style menu with seating, TVs, and a lounge-type feel.”

King went on to say the golf simulator feature is geared toward people of all ages – kids to adults.

“I’m a big golf fan,” King said. “I have played a lot of courses around the world and I have been to quite a few different simulators. It’s something I have always been interested in as a personal thing, but also felt our community needs another outlet for golf with the wintertime being so long… To have the opportunity to bring something like this to Meadow Lake and to share it with everyone else will be beneficial.”

King said his intent, however, is not to compete with the local golf course.

“We’re not here to take away from the summer, as that is the time for outdoor golf season,” he said. “But, as our winters are so long, if you want to use it for game improvement it has all the technology to get the numbers and the reads you need in order to be able to make adjustments.”

He also said the business will be the start of a new chapter in his life as he will not be returning to professional hockey this fall.

“This is going to be the next step for my wife and I,” he said. “We discussed it and made amends with how lucky we have been the last 10-12 years. My pro hockey career was awesome, and now we’re looking forward to this next chapter.”