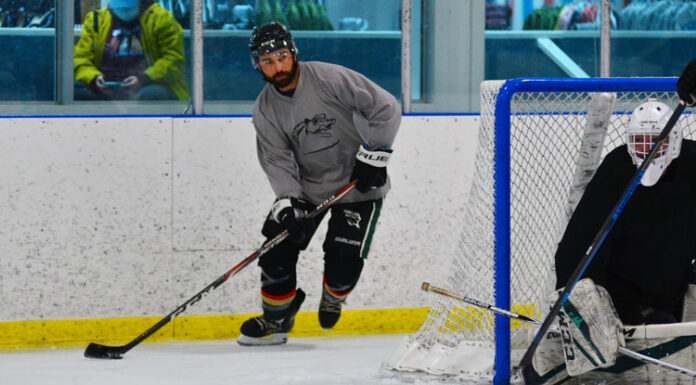 The Meadow Lake Senior Broncos are ready to bust out of the corral.

Following a meeting held Tuesday (Oct. 19), the SaskAlta Hockey League has announced it will go ahead with a 16-game, 2021-22 season. This means the Meadow Lake Senior Broncos will soon be back in action.

“Our start date is the Nov. 12-13 weekend with Nov. 13 being our home opener against Lashburn,” explained Broncos general manager Glen Dennis Jr.

All Broncos home games will take place at PineRidge Ford Place on Flying Dust First Nation. As for the season itself, however, it will look somewhat different than normal considering ongoing efforts to prevent the spread of COVID-19. First and foremost, Saskatchewan teams will play only other Saskatchewan teams, while Alberta teams have been scheduled against other squads from that province.

“But, it is looking positive in terms of there eventually being a crossover,” Dennis said. “We may determine a Saskatchewan side winner who can crossover to play the Alberta winner in the final. That’s still a long ways away at this point, though.”

Meanwhile, all participants in the SaskAlta League this season are required to be double vaccinated against COVID-19.

“That is something in effect throughout senior hockey across Saskatchewan,” Dennis added. “Every league went that way to get rid of the mask mandate.”

If double vaccination was not made a prerequisite, players would be required to mask up even while on the ice and Dennis said that would not be something most hockey players would want to do.

“As of right now, all staff involved with the Broncos, referees all the way to the time keepers will need to be fully vaccinated,” he said.

As for the team itself, Broncos hopefuls were on the ice last Wednesday night (Oct. 13) for a first skate and tryout.

“The guys looked to be in pretty good shape,” noted Broncos head coach Winston Morin. We only had about 10 guys out that night, but it’s still early. It’s hard to say how the team will shape up, but the players who were there were having a good time just being back on the ice.”

“It was nice to see so many returning players – they’re the core of the team,” Morin said.

Morin also said he is hopeful former NHLers Dwight and DJ King will return to the Broncos roster this season.
The team will be on the ice at Flying Dust every Wednesday night for the next several weeks.

“It’s nice to be back at the rink,” Morin said.

“As a league everyone is excited,” he said. “We talked at first of doing a 14-game season, but every team wanted to go with a 16-game schedule, a big, full season. A lot of teams are hurting, the rinks are hurting, and everyone just wants to get back to normal and play some hockey.”