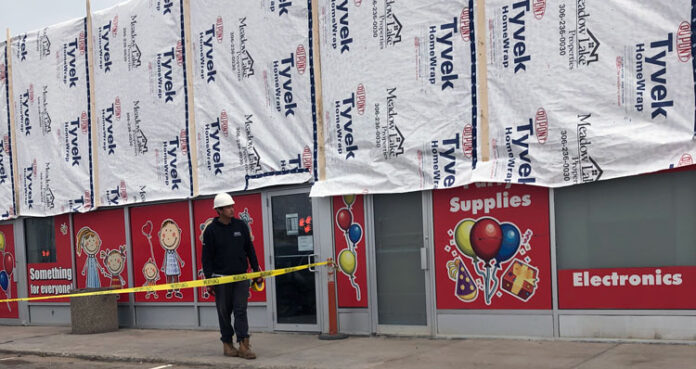 The new co-owner of the Meadow Lake Mall is stoked about the exciting changes already underway at the property.
Matt Stokes is a partner in Town Centre Properties, the Edmonton-based company which purchased the mall this past summer.

“We’re very small – it’s just my business partner and myself,” Stokes told Northern Pride. “I live in Canmore, AB and we own similar properties in some northern communities and small towns in Alberta, but we’re not trying to take over the world. We’re just small town guys who understand retail in small towns.”

Stokes went on to say he firmly believes there is a great opportunity to turn the mall, which was built in the 1980s, into an attractive location where shoppers will want to spend more time and, in turn, more money.

“We also want to make it something people can really be proud of in the community,” he added.

Work on the building itself began last week with the removal of the facia (outer covering).

“One of our company mandates is we hire local,” Stokes said. “All the trades we’ve hired to do the work here are going to be from Meadow Lake, which will benefit economic development in the community. Step one is we need to make it look like someone cares about the mall.”

The plan, he added, is to redo the facia along the commercial retail unit portion of the shopping centre.

“That involves taking off the old facia and building it up with a more modern finish, similar to how the new Co-op liquor store across the highway looks like,” Stokes noted. “We’re going to do stone columns between the tenant bays with lots of new lighting along the building, as well as horizontal, wood tone panels on the front. It will look really nice when finished.”

Stokes also said a key component of the facelift will be good signage and good lighting.

“So, we’ve also implemented a new signage criteria for all the tenants – we’re going to have cohesive signing,” he said. “We’re working with the tenants to help them understand the value of good signage and good lighting, and we believe renovations will take about six weeks. However, it’s been tough to get some materials.”

In addition to the work on the mall itself, Stokes said a number of housekeeping items also need to be addressed.

“We have repainted the lines in the parking lot, as well as the bottom of the light posts,” he said.

Among those excited about the project is Shane Schiele, owner of Pure Water Station which is located at the mall.

“I’m super impressed with the new ownership,” Schiele said. “They’ve taken ownership of the property, which is something that really hasn’t happened the last few years. It’s nice to see someone who cares about the property and who wants to make Meadow Lake look a little bit better. I’ve seen a drawing of what they hope the end result will be, and I believe it will look pretty sharp when people drive into town and the mall is the first thing they see.”

Going forward, Stokes also hopes to connect with local groups and organizations about the possibility of utilizing the parking lot for outside functions similar to how it was used this past summer as the location for a midway.

“For me, it just helps our tenants,” he said. “The more things going on around the shopping centre means more business for our tenants.”

All units in the mall are currently occupied.

As for why his company chose to invest in the Meadow Lake business community, Stokes said it comes down to the tenants and the trade area.

“This shopping centre has Extra Foods, so we know the trade area around Meadow Lake will be attracted to Extra Foods,” he said. “I now have an opportunity to make improvements and create opportunities for the other tenants, but Extra Foods is the anchor. Meadow Lake services quite a large geographic area, people come from out of town to do their shopping. We are creating a positive business atmosphere so you don’t get retail leakage into places like Prince Albert, Saskatoon or wherever… If we do a good job with the shopping centre, the services people need are in Meadow Lake and they don’t need to leave. That’s the reason we like small towns. When you do a good job, people don’t need to leave… You just need to offer the type of business or service people need and to make it look nice.”