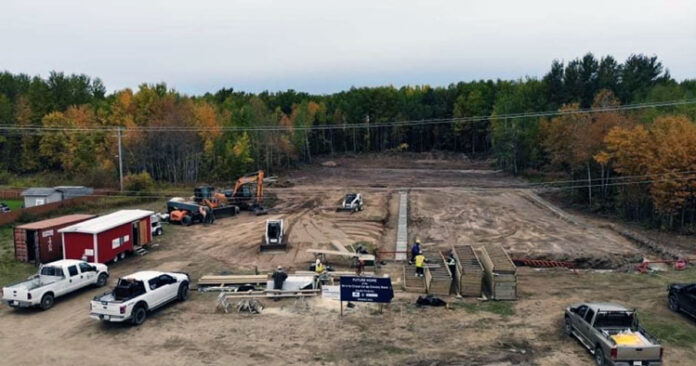 Residents of Ile-a-la Crosse have come together to create opportunity.

Recently, the Ile-a-la Crosse Co-operative Association Ltd. announced the brand new grocery store currently under construction in the community will be operational in 2022.

“We are very excited about our new project,” noted Kevin Raymond, Ile-a-la Crosse Co-operatives Association president in recent online correspondence directed to residents of Ile-a-la Crosse and area. “The Ile-a-la Crosse co-operative was formed by a group of residents who identified a need for more control over their food in the community as well as ensuring workers are offered livable wages and reasonable opportunities for growth.”

Raymond went on to explain how co-operatives work, stating they are autonomous associations of people united voluntarily to meet their common economic, social and cultural needs and aspirations through a jointly owned and democratically controlled enterprise.

“No one person or organization owns the co-operative, instead a co-operative is a collection of people who actively guide the business,” he added. “The residents in Ile-a-la Crosse and the region who choose to become members of the co-operative are the primary benefactors. As a member of your co-operative, you have direct say in how the co-op operates and, more crucially, who operates it.”

Currently, there is a board in place, but, once operational, Raymond said the Ile-a-la Crosse co-operative will move to hold elections to fill those board member positions.

“This whole initiative started as conversations and eventually grew to securing funding for a brand new build,” he said.

Meanwhile, Caralee Strome, general manager of the Meadow Lake Co-op, reiterated the store in Ile-a-la Crosse is a local initiative.

“From what I understand this has been in the works for several years,” Strome said. “This new store is not part of the Meadow Lake Co-op and I am not sure if they will be receiving supplies and products from FCL.”

Among those pleased with the efforts to establish a new grocery store in the community is Ile-a-la Crosse mayor Duane Favel.

“They have struck a committee and have been working on this co-op for some time,” he said. “The initial plan was to buy out one of the owners of a local store, but that didn’t pan out. So, instead, they got the funds in place and are going ahead to build a co-op in our community. Construction has started and they are shooting for around May or June completion date.”

Favel went on to say, when the store opens, it will mean good things for the local economy.

“Any time we have an opportunity to expand our community, offer new services and to allow the people to spend their money in the community, that means there are probably fewer people will be leaving town to do their shopping,” he said. “Also, healthy competition is always good in terms of the consumer. They want to save as much money as they can or get the most for their money, and I believe the opportunity is there to do just that.”

At this time there are two other locations in Ile-a-la Crosse to purchase groceries – the Northern Store and Yewr-Way Confectionary.