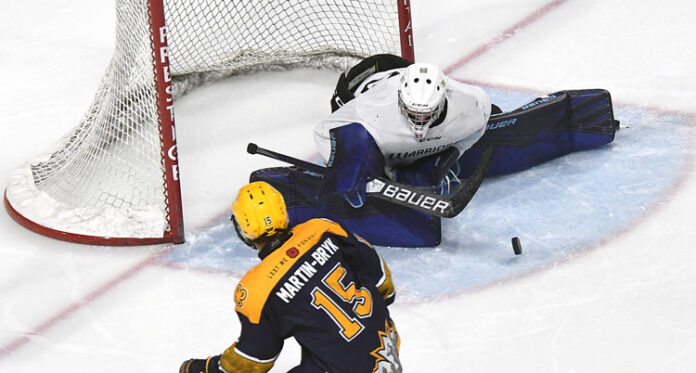 Ethan Fechter is ready to prove he has the spirit of a warrior.

The Meadow Lake goalie recently joined the Moose Jaw Warriors of the Saskatchewan Male ‘AAA’ Hockey League and, with two games under his belt since the 2021-22 season began, Fechter is excited about what the remainder of the year will bring.

“It feels pretty good,” Fechter, 17, told Northern Pride with regard to his experience with the team thus far. “Coming from a small town and working hard with (goalie coach) Travis (Harrington), going to Calgary and training there, and now being where I am today is awesome.”

Moose Jaw is 2-1 in regular season play, defeating the Estevan Bears 5-4 in a shootout Sept. 29 and the Regina Pat Canadians 4-3, also in a shootout, Oct. 2. Tuesday’s (Oct. 5) game against the Swift Current Legionnaires, meanwhile, saw Moose Jaw fall 3-2. Fechter, however, was not in goal for this game.

“I find being a goalie to be fun, especially in a shootout situation,” Fechter continued. “The pressure is on me to help my team.”

Fechter, who grew up playing in the Meadow Lake Minor Hockey system, first stepped between the pipes in his second year of Atom hockey. He was a part-time player and part-time goalie until his first year at the Peewee level when he started playing goal full-time.

When he reached his second year of Bantam, Fechter moved to Calgary in an effort to further his athletic career.

“My dad (Jeff Fechter) was looking into the different teams and different leagues I could play for,” Fechter said. “I was in Calgary for three years. I was with Edge Hockey Academy my first year and my last two years I was with the International Hockey Academy (IHA).”

The schedule both on and off the ice in Calgary, Fechter added, was more intense than what he had experienced up to that point in Meadow Lake.

“We practiced in Calgary five times a week and played every weekend,” he said. “We would also go over video once or twice a week depending on who we played and how the games went.”

One day, when competing in his first year of Midget hockey against the Prairie Hockey Academy, Fechter knew he had what he needed to take things to the next level.

“We lost that game 3-2 in overtime, but I had 68 shots against me,” he said. “That was a big confidence booster and I knew, from that point on, I could really go places.”

This past May, he reached out to the Moose Jaw Warriors.

“They were still looking for a goalie,” Fechter said. “I also went to a Prairie Hockey Academy camp and their coach watched me there, liked me and invited me to the Moose Jaw camp. The next day he called and said he would like to sign me.”

In terms of who he credits most for helping him on his journey to ‘AAA’, Fechter said Harrington, as well as fellow goaltending coaches David Marcoux of Calgary and Kelly Guard of Saskatoon have been huge influences. He also believes Moose Jaw has a chance of finding big success this season.

“Our team is good enough to be in the top four for sure,” he said.

And, in spite of having spent so much time away, Meadow Lake will always be home for Fechter.

“I’ll be coming back to Meadow Lake to graduate when the season is done,” he said.

by Phil Ambroziak
with files from Terry Villeneuve