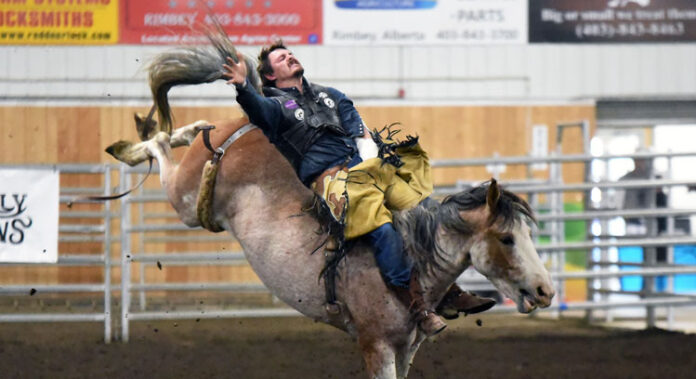 Colton Ouellette is number one again.

The Meadow Lake cowboy earned his second Wildrose Rodeo Association (WRA) championship this past weekend when he held on to the top spot following the WRA finals event held Oct. 8-10 in Rimbey, AB.

“It was a different kind of season, that’s for sure,” Ouellette told Northern Pride following his victory. “It was exciting to get the overall win, but there wasn’t as many guys wanting to go this season, the rodeos were smaller and there were fewer shows overall. We didn’t really get going until what would be the halfway point of a regular season.”

“A lot of it had to do with COVID-19 restrictions and, at the time, a lot of people were on the fence not knowing if they should go or not, wondering if it would get kiboshed again,” Ouellette added. “It turned out to be awesome for me, though. I just kept going and ended up being the season leader. I had a good lead going into the finals. And, come finals, I was second in the first two rounds and third in the last round, and it was enough to give me the championship.”

Ouellette finished the season with 4,737.5 points overall. Although Tanner Young earned the most points at the finals itself, he came into the event with 350 points landing him in second overall followed by Jared Froese, Keegan Elder and Ryley Borris.

“I’ve been bareback riding for 10 years,” Ouellette said. “I’ve ridden in the CPRA, the LRA, CCA, WRA, and this is my second championship with the WRA. I won my first one in 2017. Again, however, it was kind of a weird season – it was different. There were not as many guys competing, but it was worth it to be there for the crowds. The people who watch rodeo were just excited to be back and watching rodeo again. Next year it will be nice to start seeing some of the bigger rodeos again, and to see the hometown Meadow Lake rodeo come back.”

“Everything has wrapped up,” he said. “We will see what the winter looks like and what the spring will bring. Time will tell.”