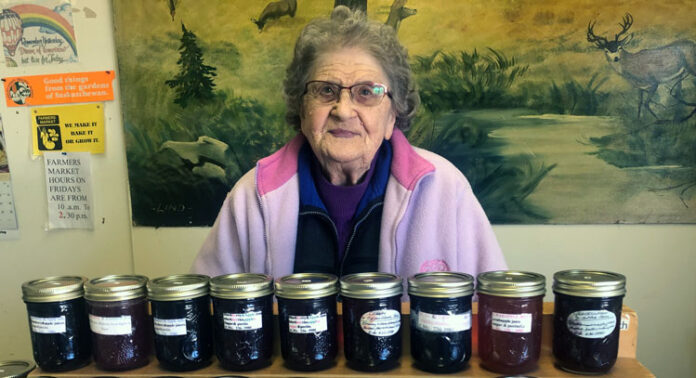 At nearly 85 years of age, long-time vendor Elizabeth McCrimmon has decided to step away from the Meadow Lake Farmers’ Market. Recently, Elizabeth spoke with Northern Pride about the market, her fondness for the patrons and her early arrival in Canada.

1. When did you first become part of the Meadow Lake Farmers’ Market?
A: I joined the market in November 1997, but these days I have a hard time getting around with the arthritis. I will probably continue to knit because every time I sit down it seems I start to knit. And, for a while, I will continue to make beeswax cream because there are still some people who really count on it. One lady who was here today said it’s not going to be the same without me. No, it’s not going to be the same, but, at the same time, you need to be realistic about it. I just can’t do it any more. I will still have some items available if people call me up, but not the jams. It’s become too hard to make the jams.

2. Are the jams what you have always been known for at the market?
A: No, because I didn’t start with jams right away. In the beginning I started with beeswax cream. I had major surgery at one time, and when I was discharged and came home, I was in pretty rough shape. My son, Clark, who was working in Humboldt at the time, talked with me on the phone and knew I was kind of down in the dumps. The first chance he had, he came to see me and brought with him a jar of beeswax cream he got from Tina Groot. I also remember sitting at the end of the table and Clark came in with this big, round, heavy something, placed it on the table and said to me, ‘Here’s the wax, come up with a recipe, learn how to make beeswax cream and stop feeling sorry for yourself.’ So, I started gradually making the cream. I didn’t feel too confident at first about selling it, but people really liked it. Clark started selling it in Humboldt and, now, it’s gone all over – to Ireland, to Scotland, you name it.

3. What else have you sold at the market over the years?
A: My sister-in-law was a real knitter, and while visiting her one weekend she showed me how to knit dishcloths because you need to have more than one thing to sell. Then, Eleanor LaBrash, who was market manager at the time, encouraged me to start with a few jams. I started with a few and, over time, gradually brought in more. It just grew and grew to the point where I nearly had too many varieties.

4. What will you miss most?
A: A lot of hard work goes into what we all do here, but it’s wonderful to know people enjoy your product. Some people just come here to visit… They don’t buy anything, they just come to chat and to talk about their day-to-day lives to the point where you sometimes feel as though you’re their psychiatrist. I enjoy it, though, and especially like how it’s a day out and an opportunity to see so many people. I will miss socializing, and all the people who come in searching for a certain type of jam. You get some who are miserable, however. I can still picture this one woman who came in one day, stood here and priced the jams, gave her friend a poke and said told her she could get a jar twice the size at Extra Foods for half the price. You need to watch what you say sometimes, but I felt like telling her, ‘well, just go get it then.’

5. When did you originally come to Canada from Ireland?
A: I came over here in May 1961. My friend, Isabel Owen, and I came over here together, but, at first, we were thinking of going to Australia. Around the same time, my brother, had been to Saskatchewan, and after seeing pictures and hearing how wonderful it was here, Isabel and I made our decision New Year’s Eve. We would try Canada first and, when we had enough money, we would go to Australia. As it turned out, we both married farmers and we never made it to Australia. I have no regrets, though.