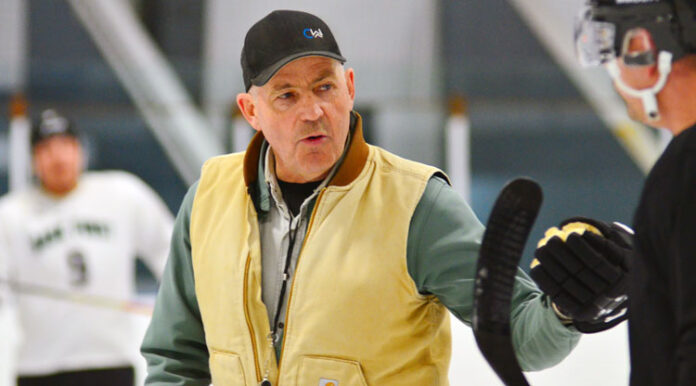 The Meadow Lake Senior Broncos will be back in action this weekend with the official start of the 2021-22 SaskAlta Hockey League season. The Broncos’ first game is set for Friday (Nov. 12) in Lashburn with their first home game Saturday night against the same squad (Nov. 13) at PineRidge Ford Place on Flying Dust First Nation.

“Things are coming along great,” remarked Broncos head coach Winston Morin. “Most of our regular players who are still in town are coming back. A few of them will be working, but we’ll see how the lineup is looking after Wednesday night’s practice.”

That practice took place after Northern Pride’s weekly sports deadline, but in addition to the familiar faces, some new additions have also been added to the roster.

“We have at least four young guys who have joined the team,” Morin continued. “Shane Hounsell is going to play this year, as well as Ostin Fontaine, Joey Stanley and Triston Mirasty. They’re going to bring some youth, and all have played some pretty high level hockey. They’re all looking good, so it will be interesting to see how they fit in with the rest of the guys.”

Morin also said the team has added a new goalie this year in the form of Matt Imray.

“He was actually going to play for us last year, but we never really got out of the starting blocks,” Morin added.

Senior hockey and the SaskAlta league in particular was impacted immensely the past two seasons because of the ongoing COVID-19 pandemic.

In early 2020, the Broncos were eliminated from the SaskAlta playoffs by the Hillmond Hitmen. The playoffs themselves were soon cancelled because of COVID-19.

As planning was underway for the 2021-22 season, originally masks were to be mandated by all parties involved including players on the ice. This has since changed, however, following the introduction of a mandatory vaccination policy. According to Morin, Broncos players, coaches and management have been welcoming of this new requirement.

“The only way it’s affected us so far is the 14-day wait after the second vaccination,” Morin said. “That will work itself out though in the first two or three weeks.”

Morin also said he is confident the Broncos can give a strong showing this year and make the most out of whatever the season turns out to be.

“Everybody is anxious to get going and things look good,” he said. “The talent is there.”

Saturday’s home opener gets underway a little later than normal, at 9:30 p.m.

“We’re ready to go,” Morin said. “It’s been a long time since we played, and while I can’t speak for the fans, the players are ready to get back at it.”