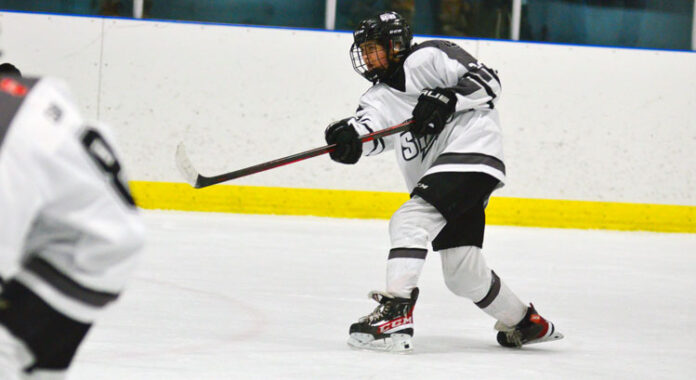 It was a homecoming of sorts for seven Meadow Lake and area hockey players when the U13 ‘AA’ North West Stars competed at Flying Dust First Nation this past weekend.

“Things are going really well – we’re undefeated in league play so far this season,” remarked assistant coach Myles Gibb. “We’ve competed in a few tournaments as well since the season began in October, but haven’t had as much success. We keep running in to Martensville who seems to be our nemesis. They beat us every time, but, other than that, it’s been a really good year so far for the team.”

Treptow and Harman both scored a goal for the Stars in Saturday’s game, while Sunday’s contest saw Logan Gibb score four times for the Stars and Bauer netted two while Treptow, Harman and Manderscheid gained single markers.

“These were our only two home games at Flying Dust this season,” Myles Gibb continued. “Unfortunately, that’s all we were able to get. Because this is an area team opposed to a city team, we’ll move our home games around from here to Maidstone, Spiritwood, Edam and so on while the rest will be in Battleford.”

Gibb also acknowledged the efforts of local players competing in ‘AA’ and ‘AAA’ hockey at various age levels, adding all the Meadow Lake and area athletes have made him proud by always giving their very best.

“We have a couple kids playing ‘AAA’, as well as ‘AA’ in Battleford, and, for the group of coaches and parents in the area, it means a lot to us,” he said. “The coaches and parents also need to be recognized – they are heavily involved and committed to their respective teams, right from U18 down to minor hockey.”

Currently, the Stars are ranked third in the SAAHL’s Centre Four standings. On top are the Humboldt Broncos followed by the Tisdale Ramblers. The Warman Wildcats are fourth, West Central is fifth, followed by the Melfort Mustangs and the Prince Albert SFS Greyhounds.

“We’re going to crawl up in the standings,” Gibb said. “Some of the other teams have a few more games in hand on us. I’m hoping, in the league, by the time we catch up in games we’ll be at the top.”

This Friday through Sunday, the team will be on a three-day road trip to Warman before moving to Tisdale and Melfort.

“We’re taking a bus, so the kids are super excited about that,” Gibb noted.