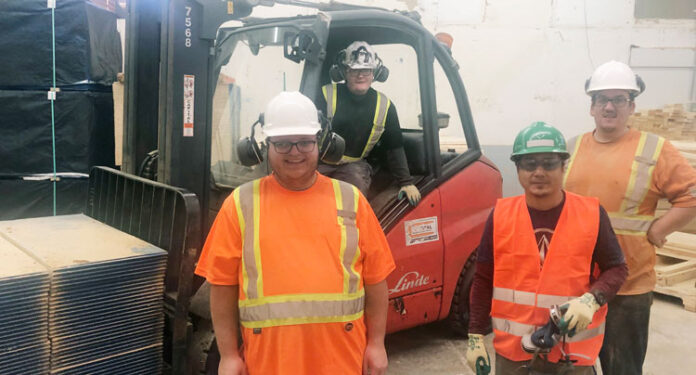 Earlier this fall, Tolko Industries donated a forklift to the Multiworks shop on 3rd Avenue East, a piece of equipment that has allowed workers to increase productivity while, at the same time, embrace a new skill.

Among those who have learned to operate the forklift is Andrew Campbell.

“It was pretty exciting,” Campbell said about learning to use the forklift for the very first time. “It’s easy to use now, but, at the start, it was a little hard to get used to the different pedals. The most fun part is just being able to drive it around, and the hardest part was learning the hydraulics and making sure everything stays straight.”

Campbell did note, however, the addition of the forklift – a machine that replaces the stand-up forklift used prior – has allowed him and his co-workers to get more work done in a shorter timeframe.

“We used to have that old one over there (the stand-up forklift) which is easier to operate than the new one, but we can do more with the new one – it can lift a whole pile (of dunnage) but the old forklift could only lift half a pile,” he said.

Campbell has worked at the Multiworks shop for more than a year.

Another worker who often uses the new forklift is Kyle Thickett.

“It’s fun,” Thickett said. “I know every single gear on it, and all kinds of stuff. We had to learn a lot of safety things before we used it though.”

This was echoed by another shop worker, Anthony Lafleur.

“We were taught to always make sure there is no one behind us, and if we see someone behind us to stop and not to move until they are out of the way,” Lafleur said.

“This way they won’t get mad or angry, or killed,” he noted.

Lafleur also reiterated Campbell’s comments about the forklift making the job much easier.

“It’s nice to be able to pick up an entire pile (of dunnage) instead of just part of one,” he said. “We used to move a lot more of it by hand, and now we use the machine.”

Dunnage is the durable padding material used to protect goods during shipping. Multiworks produces it using scrap material from the local mills, and has agreements in place to provide dunnage to both NorSask sawmill and the Tolko OSB mill.

“It’s fantastic to have these partnerships,” remarked Multiworks executive director Dave Thickett. “They allow us to have guys employed who may not have a chance to work in this kind of an industry. As a result, they’re learning all about the safety issues that go with this type of work. We really focus on learning safety procedures, working safely and it’s a skill they’re going to be able to take with them if they ever go somewhere else.”

Dave Thickett said the goal is to have the workers earn their forklift certification.

“This way they could use it to work anywhere,” he added. “Having great partners like NorSask and Tolko makes all of this possible.”