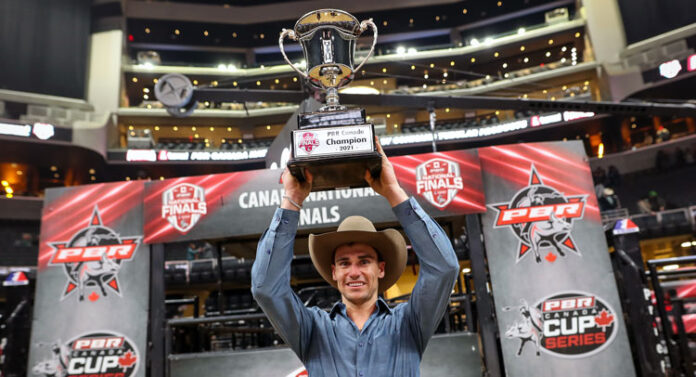 Cody Coverchuk is ready to show just how much of a proud Canadian he truly is.

Coverchuk, who in November was crowned PBR Canada champion, now has his sights set on the PBR Global Cup, an annual event that showcases the top bull riders from around the world as they represent their respective countries.

“As long as everything is good to go with the border, I will be on Team Canada in 2022,” Coverchuk told Northern Pride. “It is only a one-day event in 2022 I do believe, which is kind of different from previous years.”

The PBR Global Cup is scheduled for March 5 in Arlington, Texas.

The PBR Global Cup is a bull riding team competition developed in 2017 by the Professional Bull Riders organization. The intent is to give the winning country the ability to say they have the best bull riders in the world.

“It’s the best guys from each country – you represent your country, which is what makes it special,” Coverchuk noted. “Anybody in any sport, to get to represent their home country is a dream come true. I was lucky enough to do it once in 2017 but, unfortunately, I have not been back on Team Canada since.”

In 2017, the PBR Global Cup was held in Edmonton and was won by Team U.S.A. Brazil was second while Canada came in third overall. Other competing countries included Australia and Mexico.

In terms of qualifying for the event, Coverchuk said it comes down to who PBR Canada feels is the best in Canada at that time.

“Your success the previous season certainly is taken into account, but it comes down to whoever is riding well at the time when the Global Cup comes around,” he said. “Hopefully I’m still riding well at that time. It’s usually Brazil and the U.S. that dominate at the event, but I feel Canada has a good chance in 2022.”