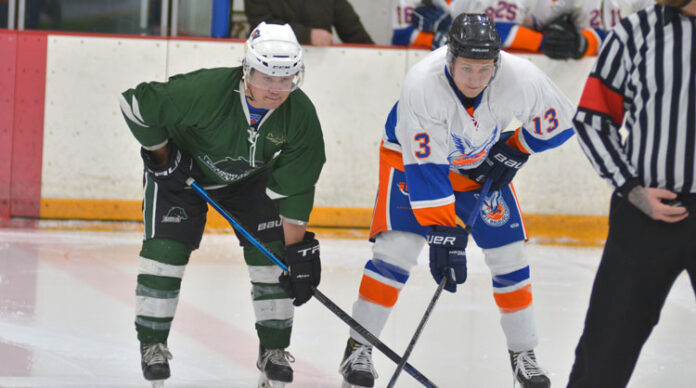 Two rival teams are joining forces in an effort to secure a common goal.

As the Meadow Lake Broncos gear up for the opening round of their Senior ‘A’ provincial series against the Warman Wildcats this weekend, they’re being joined by six members of the St. Walburg Eagles, the very team the Broncos faced Sunday (Jan. 30) in regular season SaskAlta Hockey League action.

“We had intentions of entering a team into provincials this year, but, at the last minute, we backed out because of too many uncertainties,” explained Eagles head coach Bernard Leer. “We were then approached by the Meadow Lake Broncos. They wanted to know if they could use some of our players. Over the years this is something we’ve done – some years we’ve used some of theirs, some years they’ve used some of ours, so this isn’t the first time we’ve combined teams to go to provincials.”

The Broncos are scheduled to meet Warman Sunday at 5:30 p.m. at the St. Walburg Arena.

“The fact some of the games will be played here in St. Walburg, well, that caused a lot of excitement at our rink,” Leer said. “It’s been two years with not too much of anything happening here, so this is a chance to get things going. I can sense the excitement. Everyone is behind it.”

Leer is also optimistic there will not only be a large contingent of St. Walburg hockey fans in attendance, but Meadow Lake supporters as well. He also believes the Broncos have a pretty good chance at securing a provincial championship this year.

“Robin and Regan Yew are no strangers to Meadow Lake,” Leer said. “They played some of their minor hockey there. Since Robin came to our hockey club he’s played nothing but defence – he has a great attitude and love for the game. His twin brother, Regan, is a forward. He likes to play that wide open, fast game. There’s a reason for that – he’s good at it. In a recent run against Hillmond he racked up 14 points in two games.”

Worms, meanwhile, was described by Leer as a hometown boy from St. Walburg.

“He’s a strong, physical defenceman who comes to play every game,” he added. “He’s not hot and cold. As for Casey Knight, everyone knows Casey whether it’s from the chuckwagon world or the hockey world. He’s played college hockey and Junior hockey, and is known for his gritty, never-quit attitude which makes him an asset to any team. He never gives up.”

Leer went on to describe Bailey as a player who can put the puck in the net, while Bridges, he said, has set goaltending records when he played in the WHL.

This past Sunday, however, the Broncos faced and defeated the Eagles 8-1 in St. Walburg.

Shane Hounsell and linemate Jared Iron each notched hat tricks in the game while single markers were added by Ashton McIntyre and Cullen Morin. Netminder Jared Lafond picked up the win between the pipes.