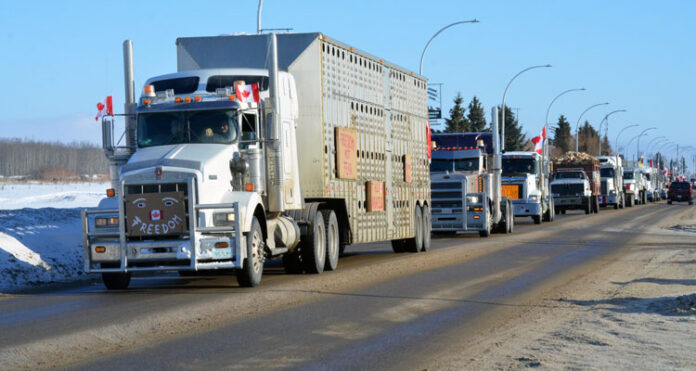 The year 2021 was all about vaccine rollouts, but, 2022, it seems, has been about a rollout of an entirely different kind.

In a showing of support for the Freedom Convoy staged this past week in Ottawa, numerous vehicles including transport trucks along with vehicles of all size, shape and description took to the streets of Meadow Lake Saturday (Jan. 29) to form a convoy of their own.

“Countries around the world have joined together in this rally,” remarked Brad Stevenot who led the local procession which began at 1 p.m. at the Meadow Lake Mall. “Truckers from all over the country are following each other to Parliament Hill in Ottawa to make a statement, and that’s incredible. That’s why we’re here today. We’re here to come together in unity.”

Following the singing of the national anthem, the convoy headed from the mall to 9th Avenue, down 3rd Street East to Railway Avenue, along Railway Avenue to Highway 4 and back to the mall.

“There will be a lot of people supporting us by honking, so honk back and make some noise,” Stevenot told participants prior to the event. “That’s what we want to do, we want to be visible out there. Again, we’re here together in unity.”

Freedom Convoy 2022 began when truck drivers from across Canada chose to protest COVID-19 vaccine requirements for re-entering the country, requirements that were introduced by the federal government Jan. 15. Composed of several routes traversing all provinces, truck convoys converged on Ottawa Jan. 29. The movement soon grew to include opposition to other pandemic-related mandates and, as of press time, the demonstration was still ongoing.

When contacted about his views on the Freedom Convoy and, in particular, the event held in Meadow Lake, Dr. Gavin Van de Venter – chief of staff at the Meadow Lake Hospital – described it as a “very controversial issue which goes a long way to solidify the divisiveness amongst people.”

“There certainly was a strong showing of support,” he stated. “I am happy to report, as far as I have heard, the convoy held in Meadow Lake was peaceful and respectful. It is wonderful to know democracy is healthy in Canada and we can express ourselves safely. I was not surprised by the large amount of support, as I believe many of the convoy supporters are unvaccinated people who want to express their concerns about the whole issue or some who are vaccinated also wanted to show they believe the mandates are not acceptable.”

As a provider of medical care, however, Van de Venter said he is disappointed in the low vaccination numbers locally.

“I am also worried about the falsehoods our premier has spread, as it results in galvanizing people in their false, anti-science rhetoric,” he said. “We are all so done with COVID, but I take solace in the words of an elderly lady who saw me as a patient. When she saw how much strain the pandemic has placed on my colleagues – nurses, docs and medical personnel – as well as myself, she gently held my hands and said, ‘this too will pass, doctor.’”