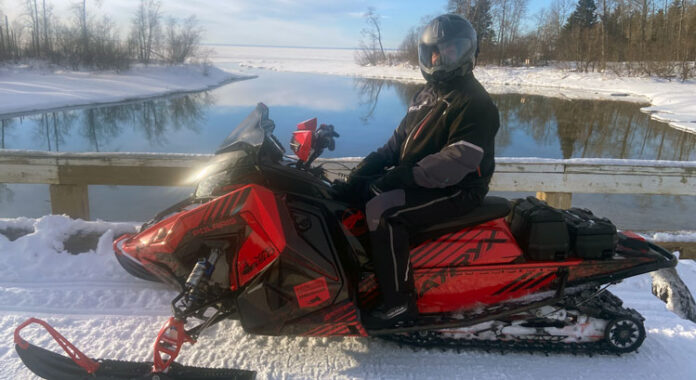 While a great number of people have decried the large amount of snow to fall on Meadow Lake and area this winter, there are some who strongly believe in the old saying, “the more the merrier.”

According to Cindy Gottlob, president of the Northern Lights Snowmobile Association, the amount of snow on the ground this year has been greatly welcomed by snowmobilers from not only Meadow Lake but across the entire Northwest.

“This is our earliest season I can remember,” Gottlob said. “We started grooming (the trails) Dec. 19 and I don’t think – at least in the last 12 years – we’ve groomed before Christmas. It’s been great. We have the snow, we have the right conditions and we’re doing it. There are all kinds of people on the trails. I know it’s been cold, but we’re snowmobilers and we know how to dress for the winter.”

The ideal conditions, Gottlob added, have resulted in rides being organized by the club almost weekly, while memberships have also increased. At the same time, however, it hasn’t been a perfect year, primarily because of COVID-19.

“The whole COVID thing messed the entire world up, including snowmobiling,” Gottlob noted. “Our provincial festival has been cancelled because of uncertainties, so, instead, various clubs are planning their own ride, getting pledges and will give the money to SaskAbilities on behalf of Easter Seals Snowarama.”

The local ride in support of SaskAbilities – its 45th year – will take place Feb. 20.

Meanwhile, the local trail system will also be utilized this month by Shane Hartje, executive director of the First Steps Wellness Centre in Winnipeg. Hartje, a paraplegic, will be snowmobiling across the province en route back to his home community in an effort to raise funds and awareness for the spinal cord rehabilitation centre he represents. The local portion of his ride begins Feb. 13 in Goodsoil.

“We are planning to ride from here Feb. 13 and have the shelter warmed up and ready to go for him,” Gottlob said. “He will even have a film crew with him.”

About a week later, the club is planning to hold a ‘Take a Friend Snowmobiling’ day, an event planned for Feb. 19 starting at the Lions Den in Meadow Lake.

“There will be hot chocolate, a groomer out front, demo sleds so you can try out a snowmobile – it should be a lot of fun,” Gottlob stated. “We will ride from museum south to the corner of Highway 304 and back. We want to get people who have never been on a snowmobile or who maybe have not been on one for 30 or 40 years and who want to try one out again.”

She went on to reiterate how much snowmobiling has grown in popularity in the last couple years.

“There are so many people I have met on the trail system who are new and who have said they just wanted to find a way to get out during the winter and stay active,” Gottlob said. “For me, it’s been a lifelong passion. I’ve been on a snowmobile since I was three years old.”

Regardless of snowmobiling’s growing popularity, there are still rules that need to be followed. This is especially true when operating snowmobiles within city limits.

“Each year, the City of Meadow Lake gets complaints about snowmobiles cutting through private property,” noted city manager Diana Burton. “Not only is it trespassing, this also has potential to cause property damage. This is also a safety risk not just for property owners, but for sledders as there can be boulders, decorations, and other items on properties covered by snow posing a safety risk to an operator or passenger on a snowmobile.”

Burton went on to provide a series of tips for snowmobilers when moving forward this season.

“You may operate a snowmobile on the portion of Highway 4 for the purpose of crossing the highway at the intersection of 9th Avenue West and Highway 4,” Burton added. “All snowmobile operators shall yield the right of way to vehicles on Highway 4. It is also illegal to operate an unregistered snowmobile on any highway or lane within the municipality. All sleds must be registered in order to operate within the city.”