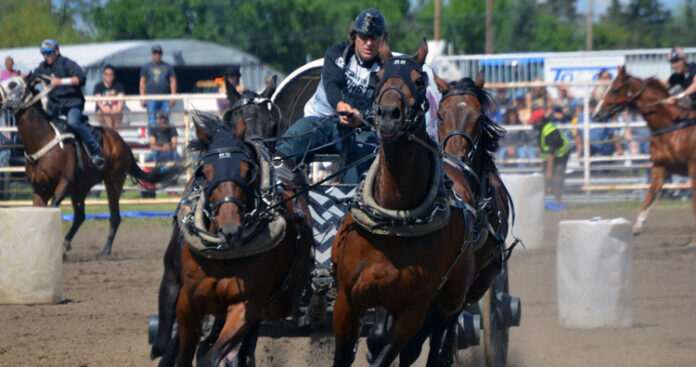 Changes announced for this year’s Calgary Stampede have led to several local chuckwagon drivers making some changes of their own.

Chuckwagon racing, which was absent from last year’s Stampede, is scheduled to return for 10 days in July, but instead of the traditional 36 drivers, the number of competitors has been reduced to 27. There will also be fewer wagons on the track during each of the nine heats per night.

“Each heat will now see three wagons roll onto the Stampede track rather than four,” noted Kristina Barnes, communications manager for the Calgary Stampede.

This is something that does not sit well with World Professional Chuckwagon Association (WPCA) driver and Meadow Lake resident Dustin Gorst who was originally invited to compete in Calgary this year, but has instead opted to race at the second annual North American Chuckwagon Championship (NACC) in Lloydminster instead.

“I will be on the WPCA tour again this year,” Gorst confirmed. “I like it, my family really likes it and that’s where we’re going to continue to be the majority of the summer. When it comes to July, however, my wife and I decided the direction the Calgary Stampede is going, we didn’t like it. We like the direction the NACC is heading and decided to run there instead of the Calgary Stampede.”

“This will be my first year at the NACC,” Gorst noted. “Most importantly to me is racing four to a heat. We need to keep the western heritage alive and, along with four to a heat, we’re rewarding the best wagons. Calgary is transitioning into rewarding safety over aggregate time… I truly believe in western heritage and competing for something means more to me than anything.”

Gorst also said the 27 drivers for Calgary are hand-picked and don’t really follow any standings. He also doesn’t believe there is anything statistical in nature to prove three wagons opposed to four is cause for improved safety.

“They (Calgary drivers) will earn more money without necessarily being the fastest wagon,” he added. “They will have winners, but they used to hand out aggregate money. They’re now taking those aggregate bonuses and handing them out as safety bonuses. I don’t like that direction. I’m happy for anyone who wants to compete there, but if you’re going to ask me to make a decision between competing and just putting on a show, I’m going to choose to compete.”

The NACC, meanwhile, has a tarp sale coming up in March.

“A lot of people have ask me to come home, well Lloydminster is like home to me and I can’t wait to race in front of true chuckwagon fans,” Gorst said.

As noted, one driver planning to still compete in Calgary this summer is Loon Lake’s Roger Moore.

“At one time Calgary was where a person wanted to be,” Moore said.

Moore will be competing on the WPCA tour once again this summer.

“I raced one show last year (Ponoka) just to see if I wanted to keep racing or sell out,” he said. “I went to Ponoka and I made my mind up to go another year. My intentions were to join the CPCA this year but I wasn’t guaranteed a spot in the NACC… I have to race one or the other, either Calgary or Lloyd, so I chose Calgary.”

According to Barnes, the Calgary Stampede is currently participating in Alberta’s Restrictions Exemption Program and will continue to adjust measures with the understanding safety and guest expectations will continue to evolve.