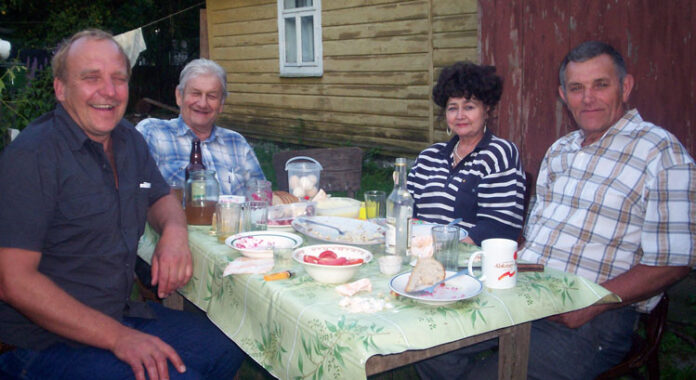 The Russian invasion of Ukraine has hit close to home for a former teacher from Saskatchewan’s Northwest.

Don Skopyk, who lived and worked in the Beauval area for decades, has direct ties to his country of origin and, since the invasion began, has been maintaining regular contact with family and friends still residing in the war-torn nation.

“I talk to my family over there via Facetime every second day, in fact I am planning to call them in the next hour or so,” Skopyk told Northern Pride when interviewed earlier this week. “During my first Facetime call to them (since the invasion began Feb. 24), they were all huddled together at 10 p.m. and were all bawling their heads off. They were all in shock.”

Skopyk’s family is located in the western Ukrainian city of Chervonograd.

“The closest any shelling came to my village was about 80 kilometres away in a city called Lutsk,” he added. “They hit a communications tower there, but those areas have not been targeted as of late. It seems they (Russians) are focusing on the east with most of the action is taking place about eight hours away where my family is from.”

Skopyk, who now lives on an acreage about an hour outside Saskatoon, also has stronger ties to Ukraine than simply familial ones. For many years he has travelled to the country, living and working there for several months at a time.

“My first trip over there was 42 years ago, and I have made 13 trips in the last 15 or 16 years,” he explained. “They were all for up to five months at a time, so, if, you do the math, I’ve probably lived in Ukraine for more than five years. The last time I was over there was about two years ago, right before the pandemic hit.”

During his time overseas, Skopyk worked at a university in the City of Lviv, also located on the western side of the country.

“It’s about the eighth largest city in Ukraine with about 700,000 people – I lived and worked in that city for two months about 10 different times,” he added.

Upon hearing news of the Russian invasion, Skopyk said the only word he could use to describe his reaction was “shock.”

“When I woke up that day, looked at the news and it said ‘Russia invades Ukraine’, I thought it was fake news,” he said. “I couldn’t believe it. I talked to people I know in Ukraine the day before and, even though there was this impending invasion, they were saying not to worry about it because there was no way Russia was going to come into Ukraine. I felt the same way, and my Ukrainian friends in Saskatchewan felt the same way. The next day it was just total shock. It was like the feeling you get when you hear someone has died. I went into a numb state of disbelief.”

Since the war began, Skopyk said many of the people he knows from Ukraine who are his age or younger have been called to action as military reservists, while he has also extended offers to fly members of his family to Canada until tensions cool off.

“I told them to get to a travel agency and I could get at least two people here tomorrow – aunts, cousins, whoever, but they’re not budging,” he said. “They are adamant about staying even though I told them, in a few days, we may no longer be able to talk via Facetime or even by telephone. Kyiv (the Ukrainian capital) will inevitably be smithereens or it will be controlled, so they may change their minds in the next day or two. Still, no one is giving up. I think these guys (Ukrainians) are going to fight to the last man. I’m cautiously optimistic I will one day be able to return to Ukraine, but the reality is I don’t know what form of country will be left even if they’re successful in repelling this invasion. It’s going to be such a loss.”

Also concerned about the ongoing conflict is another Skopyk, John Skopyk of Meadow Lake. Although he doesn’t have any direct ties to the country, it is where his family roots can be traced back to, and, like many others who live here, he is concerned about the action Russia has taken.

“When it comes to any war, people should be concerned,” John Skopyk noted. “There are a lot of Ukrainian people here in Meadow Lake, however, and even more throughout Saskatchewan, so this one hits very close to home.”

Since the conflict began, John Skopyk said he has been following news updates regularly.

“I just hope the Russians and the Ukrainians here in Canada don’t get into a fist fight and can still shake hands with each other,” he said.

This is also the hope of Fr. Ryan Bishop of All Saints Orthodox Church.

“There aren’t a whole lot of people from Meadow Lake who have active relationships with relatives over there considering so much time has passed since their families settled in Canada,” Bishop said. “Their personal connections are scant, at least from the folks I’ve spoken to, but there are still emotions involved. They have all heard stories about what Ukraine is like. It’s their patrilineage. It affects them deeply, even if they don’t have that direct connection.”

Bishop went on to say the dimension with which people in Saskatchewan and across the country are having the most problem with is the spiritual dimension.

“The conflict in Ukraine has somewhat of a religious character to it given the relationship between the Russian church and the Ukrainian church,” he said. “That makes things difficult. We haven’t had any problems with this in Meadow Lake, but many communities across Canada are struggling with their churches being fractured because of this conflict. They have members who are Ukrainian and members who are Russian, as well as members from a shared lineage. They are quite torn about it. Thankfully, we’ve managed to stay out of that conflict. Our people mourn what’s happening, but there’s no animosity there. The real tragedy is one Orthodox Christian nation is attacking another, and right outside of lent which begins Monday.”

Bishop further described what is happening in Ukraine as fratricide – brothers killing brothers.

“We have been praying,” he continued. “The church has been involved with some parishes that are more connected. We’re connected obliquely, but there are several (parishes) with family (in Ukraine). We are praying for those families and for those churches.”

All Saints Orthodox Church will be holding a special prayer service for the conflict this Friday (March 4) at 7 p.m.

Meanwhile, Meadow Lake MLA Jeremy Harrison described the Russian invasion of Ukraine as “an egregious violation of international law and a cruel and reckless act that must be met with a strong response.”

“Our government has called on the federal government to continue to work with our allies in taking action to severely sanction Russia and its leaders, as well as reaffirming Canada’s commitments to our NATO partners to deter Russia from broadening the conflict,” Harrison said. “At this time, the overall impact of the Russian invasion on Saskatchewan’s economy is unclear. Our bilateral trade with Russia is very limited.”

What Saskatchewan does have, he added, are deep connections with the people of Ukraine.
“As minister responsible for immigration, I sent a letter to my federal counterpart, which made it clear Saskatchewan would welcome thousands of refugees from Ukraine,” Harrison said.

Ukrainian culture and traditions are deeply embedded in Saskatchewan, as approximately 15 per cent of the province’s residents trace their ancestry to Ukraine.