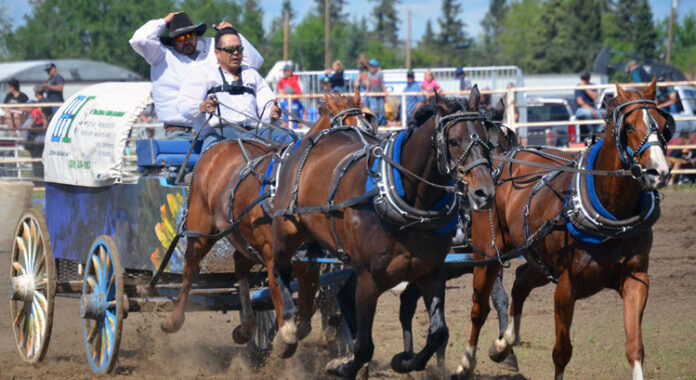 It’s only in its second year, and the North American Chuckwagon Championship is already highly regarded as one of the premier events of the sport.

This was made evident March 24 when – at the first-ever NACC tarp auction – $963,000 in sponsorship money was generated for the 32 drivers who will compete at the Lloydminster event July 8-16.

“It was a huge success,” remarked NACC organizer and Canadian Professional Chuckwagon Association (CPCA) driver DJ King of Meadow Lake. “The turnout was great. There was a packed house (at the exhibition grounds in Lloydminster) and, at the end of the night, I believe all the drivers were very happy with the outcome.”

Makwa Sahgaiehcan First Nation’s Devin Mitsuing – who plans to return to the CPCA this year following a three-year hiatus – tied for top spot on the list by earning $80,000 in sponsorship support. Also garnering $80,000 was Rae Croteau of Bonnyville.

“The sale overall was a success, and – as far as my bid goes – I was kind of surprised, but also proud to be recognized,” Mitsuing said. “I really look forward to racing at this year’s NACC and being able to back that bid up.”

Other notable local drivers scheduled to be part of this year’s show include former Calgary Stampede champion Logan Gorst who received $76,000 and younger brother Dustin Gorst who also nabbed $76,000.

“That’s what made it such a success, so many great sponsors bidding up the drivers who I believe walked away with more than they were expecting,” King noted. “We didn’t hold a tarp sale for last year’s inaugural event, and, for sure, the support was there 100 per cent.”

In 2021, the NACC was originally booked as an alternative for drivers who were not invited to compete in Calgary. However, Calgary Stampede officials announced the Rangeland Derby chuckwagon races were cancelled last summer because of pandemic-related impacts on the 2020 and 2021 chuckwagon racing season across western Canada. Although the Calgary show is back on this year, some drivers have opted instead to compete at the NACC.

“This will be my first season back with the CPCA for three years because of my power engineering schooling, and because of COVID-19,” Mitsuing said. “I’m looking forward to being around the people, the crowd and the sponsors. I cant wait to get back on the track. Last year was anyone’s first time seeing the NACC and just being in the crowd watching gave me the itch to be back out there.”