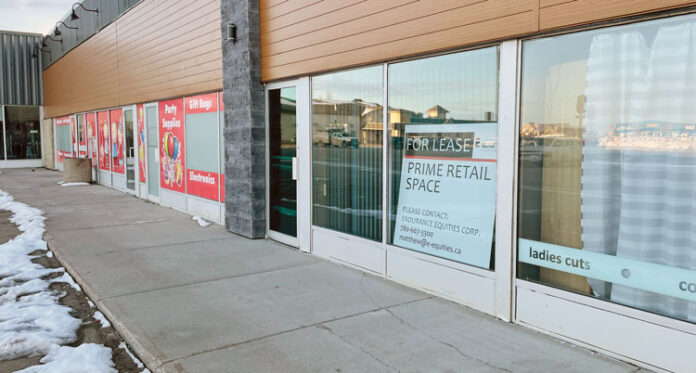 During city council’s regular meeting held Monday (March 28), approval was given to a discretionary use application from Canadian Greens Ltd. which will allow the company to open a cannabis retail store at 812 9th St. West, or – as it’s commonly known – the Meadow Lake Mall.

“In 2021, council approved a zoning bylaw amendment to add cannabis retail sales as a discretionary use in the C1 (highway commercial zone),” explained building official Neil Marsh in his official recommendation to council. “This application is in the C1 zone and is fully compliant with all other zoning requirements and regulations.”

“I know this is going into the mall, but which location will it occupy – what was in there before?” Read asked.

Mayor Merlin Seymour said the pot shop will be located in the unit that formerly housed Meadow Lake Flowers and Plants toward the north end of the mall.

City clerk Ferne Hebig replied by noting the new business can sell retail cannabis products, but is not permitted to manufacture them.

“They can grow flowers or plants as much as they would like, they just can’t grow marijuana plants,” she said.

Once up and running, the Canadian Greens location will mark the third retail cannabis outlet in Meadow Lake. According to administration, there have been no issues associated with the first retail cannabis business – Tweed – located on Centre Street or with the Spruce Buds store recently approved by council for another highway commercial spot within city limits. The latter has yet to open, but renovations to the site are underway and there is no set time as to when Spruce Buds will open.

“I don’t have that info, but, once we approve a discretionary use application, the applicant has 12 months before it expires,” city manager Diana Burton said.

“By comparison, the recently approved Spruce Buds store is approximately 520 metres from Westview Park,” Marsh continued. “Furthermore, cannabis retail locations are required to check the ID of everyone who enters the establishment.”

The distance from the mall to nearby schools was a concern raised by both Read and Seymour.

“When we amended the C1 zone, we had the opportunity to include a set distance from schools, but council chose not to at the time,” explained Burton. “This is discretionary, so council does have the option to deny this, but, if you choose to deny it, you need to give a reason. It (distance from a school) is a criteria you can use when deciding this, but it’s not required as per the bylaw.”

Since retail cannabis sales were first introduced, provincial regulations have been relaxed, removing the limits on numbers of cannabis outlets in any one community. Council voted to amend the city’s zoning bylaw to add retail cannabis sales as allotted use in the C1 zone last year upon receiving a discretionary use application for the Spruce Buds location.

Following Monday’s discussion, council voted in favour of Canadian Greens’ application with the exception of Seymour who was opposed based on his opinion pot shops should not be as close to local schools as this one will ultimately be. The city is also not 100 per cent certain as to when the third cannabis shop will be open for business.