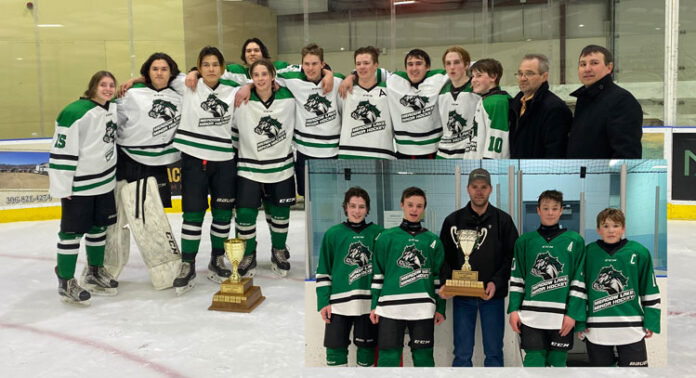 Meadow Lake Minor Hockey’s 2021-22 season is over, and two more teams have gone out on top.

Firstly, the U18 Stampeders were crowned STEP League champions in their division following two straight wins over Hillmond – the first last Wednesday (March 23) at PineRidge Ford Place on Flying Dust First Nation and the second this past Friday (March 25) in Hillmond.

“We won last Wednesday night’s game 5-1,” remarked Meadow Lake U18 coach Shane Nolin. “It was a best-of-three series, so Game 2 was held in Hillmond Friday night, and we won that game, also by a score of 5-1. The guys really played well – they played a complete game, especially Friday night. The score was 2-1 quite a ways into the third period, and then we got up 3-1, 4-1 and it ended 5-1. However, it was a close game up until well into the third.”

Nolin credits all members of the squad for their contributions, stating the roster had a lot in the way of depth this season.

“We also played a really good defensive game with strong goaltending by Lindsey Nolin in both outings,” he added.

Going forward, Nolin is also confident the team can maintain its momentum when hockey resumes next fall.

“There are 10 players who are third year, so the team is going to look a lot different next year,” he said. “At least half of them will be moving on with whatever they choose to do in terms of hockey. However, the second-year players who will be third years next season showed up big in the finals – the team will be in good hands come next year.”

Among the third-year players who will be moving on next season is Damon Pockrant.

“Our team played well and worked hard all year,” Pockrant told Northern Pride. “We just finished losing out of our provincial run, but we were able to refocus quickly and set our sights on winning the league.”

Pockrant went on to note, in the first game, the Stamps came out fast and scored two goals right away.

“It was easier to play at home with our fans in our home rink,” he said. “Winning the first game seemed easy, but, going to Hillmond for Game 2, we knew it was going to be tougher.”

Pockrant described Game 2 as nerve-racking considering how close it was until about halfway through the third period.

“Our goalie, Lindsey Nolin, took away the pressure by making some great saves,” Pockrant said. “We then settled in and continued to play hard with the pressure mostly in their end. We got a couple more goals and the momentum switched in our favour after that. I was so excited when we won and grateful to share that experience with my friends. Winning this league championship is amazing as it is my last year. There are many of us who are third-year players who never won a championship before, and we finished our minor hockey journey as champions. It was a great way to end.”

Meanwhile, in what was the final minor hockey game played at Flying Dust this season, the U15 Stampeders also claimed the STEP League championship in their division by overcoming Edam 4-0 in Game 2 of their best-of-three series Monday night (March 28).

Beck said his team outplayed their opponents throughout Monday’s game, adding Jarrod Gibb scored early to put the Stamps up 1-0. Kobe Derocher scored late in the second to make it 2-0, while, going into the third period, Reid Beck made it 3-0 before Derocher scored again later in the period to cap the victory at 4-0.

“Overall, it was a very solid performance all throughout the lineup, and a great victory for the team,” Beck said. “It was a really nice way to cap off the season. It’s been an extraordinary year for Meadow Lake Minor Hockey. We have the U11 champions, the U15 champions, and the U18 champions in the STEP League, and we also had the U15 and U18 provincial teams make it to the North Final, so it’s certainly been a memorable year for the organization.”

In 2019, Meadow Lake’s U13 team captured the provincial ‘A’ championship. Several members of that team were also on this year’s U15 team.