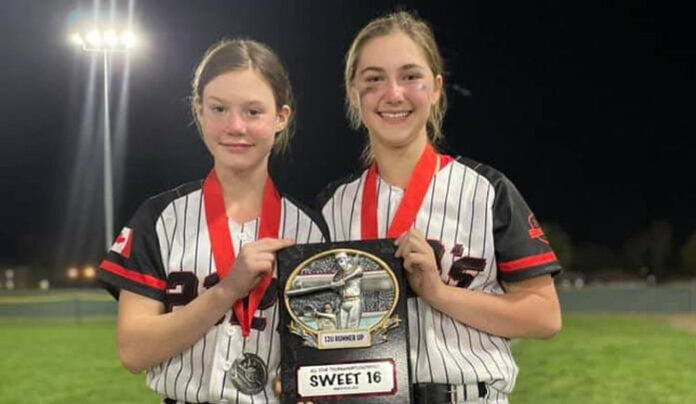 Who said softball can only be played in the summer?

Recently, two Meadow Lake athletes – Kenzi Hildebrand and Makenna Dufresne – donned their gloves once again and headed south of the border for an opportunity to compete in the sport they love most.

“In August, Kenzi and Makenna tried out for the 222’s Fastpitch winter teams,” explained Hildebrand’s father, Davin. “Both girls made the (Prairie) U12 team and have been practising with them throughout the winter in Saskatoon.The 222s is a competitive softball program that has a number of winter teams in various age groups which travel to the U.S. to play tournaments.”

As of this week’s sports deadline, Hildebrand and Dufresne were in Sacramento, California where, last weekend (March 19 and 20), the 222’s competed in the Sweet 16 tournament and came in as the runner-up.

“The girls are getting the kinks out since its been seven or eight months since they have been on the shale,” noted Clay DeBray, Dufresne’s stepfather. “The competition here in the U.S. is very elite and the teams down here play softball 12 months a year.”

Coming up, the 222’s will be in action again this weekend (March 26 and 27) as part of the Red Rooster tournament.

“They have been practising and playing exhibition games during the week between the tournament,” Davin Hildebrand said. “Kenzi is pitching for the 222’s, while Makenna plays third base. The teams are coached by Keith Mackintosh and Dean Holoien, who have had tremendous careers in softball. Dean is Kenzi’s pitching coach and she loves working with him.”

This was echoed by Kenzi Hildebrand herself.

“It is really fun to be able to play ball in California, have something to work for and to play with teammates from Manitoba, Saskatchewan and Alberta,” she said. “Dean taught me to throw harder, helped me with my mechanics and notices all the small things. Keith coaches the infielders and bugs me about being a pitcher, which is fun.”

Meanwhile, according to Dufresne, the experience she and Hildebrand are having in California will be something they will remember forever.

“It’s been really fun so far,” Dufresne remarked. “My teammates are awesome and we are very close. The teams we play are very good and playing ball in California is amazing. We have today off, so sightseeing in San Francisco is a bonus to the trip.”

As Hildebrand stated, the 222’s team is comprised of girls softball players from across Saskatchewan, Alberta and Manitoba.

Last season, both Hildebrand and Dufresne were members of the Meadow Lake Sox U12 girls softball team.