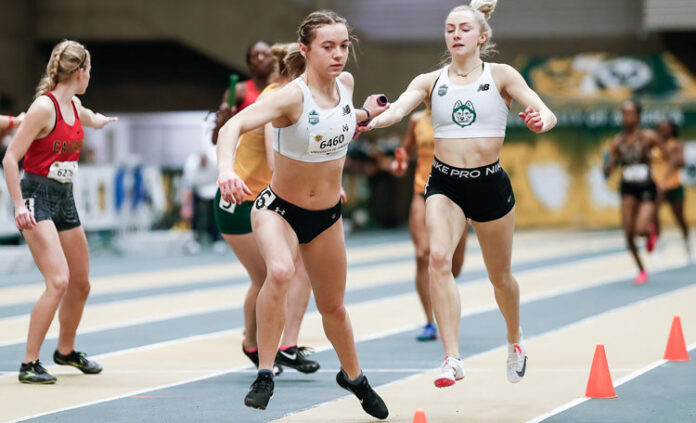 This past weekend, CHS alum Avery Pearson – who currently studies kinesiology at the University of Saskatchewan – competed as a member of the U of S Huskies at the Canada West Track and Field Championships. And, when the dust settled at the indoor track-and-field event held in Winnipeg, MB, Pearson found herself with five gold medals around her neck.

“I competed in four events and won gold in all four – the 1,000-metre, I was anchor leg of the 4X800-metre relay, I competed in the 600-metre and was anchor for the 4X400-metre relay,” Pearson told Northern Pride. “At the CanWest Championships, there’s also a points system in place for the men’s and women’s teams. The Huskies women’s team scored the most points, so we won the conference meet, received a banner and I was presented with a fifth gold medal.”

In addition to these accolades, Pearson was also named Canada West Track and Field Rookie of the Year for 2021-22.

“I’m really proud of myself and honoured to be named Rookie of the Year,” Pearson said. “I put in a lot of work with my team and this was my first indoor track season ever. It was a big learning curve at the start in terms of the new types of events, but I am just grateful to be able to compete again, and it was super fun.”

The indoor track and field season began in December and, based on the Huskies’ strong showing in Winnipeg, the team has now qualified for the U Sports Nationals March 31 to April 2 in St. John, NB.

“That’s our next stop and our last stop for the season,” Pearson said. “I’m sitting third in Canada in the 600-metre, and I’m 12th in the 1,000-metre, while our relays are doing very well also. I am going into the meet very determined to medal and work hard with my teammates as well in our relays to put us in the best position to medal in those events as well.”

Along with track and field, Pearson was also a member of the Huskies cross-country team last fall.

“I’ve been working on indoor training all winter, and once we are finished nationals I plan to take some down time and then start training for the outdoor season,” she added. “I won’t be running for the U of S outdoors, but I am still eligible to compete at the U20 World Championships again, so that’s my big goal for the summer – to qualify for my second worlds as a member of Team Canada.”

Last summer, Pearson represented Team Canada at the U20 World Championships in Nairobi, Kenya.
Meanwhile, two more former CHS athletes have also been recognized for their sporting success as of late.

Also earning recognition recently was former CHS athlete Mason Gorski who currently attends The King’s University in Edmonton where he is studying to earn a bachelor of commerce. He was selected as the 2021-22 ACAC Men’s Volleyball North Rookie of the Year.

According to ACAC officials, Gorski made an incredible impact in his first year. Dominating the league in assists per set, the young setter is said to have been the key contributor for the men’s volleyball program at university.