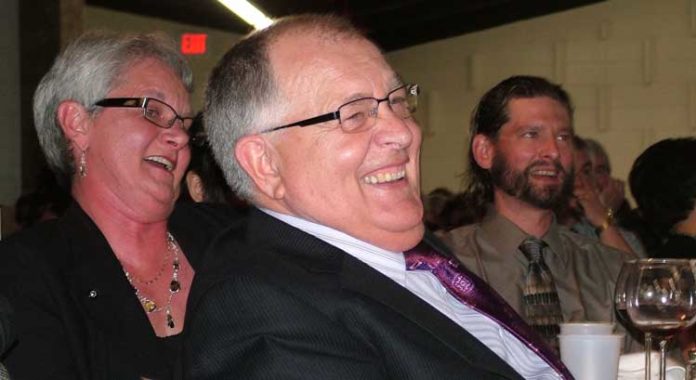 After providing four decades of service to the people of Meadow Lake and area, Dr. Mervin Johnson has a story to tell.

And that’s indeed what he is doing in the form of 40 Years of Country: Life of a Rural Doctor in Northwest Saskatchewan, a book of memoirs written by Johnson which will be available soon for anyone interested in the life and experiences of a doctor living and working in Saskatchewan’s northwest.

“It (book) is finished, all the corrections have been made and the publisher is supposed to be printing it now, so it won’t be long,” Johnson told Northern Pride.

Johnson went on to say, the idea for the book began simply by making a few notes about his life and times in Meadow Lake to pass along to his children.

“The idea was to pass down some of my memories, but, as I got into it and started looking at some old photographs, I decided I might as well do a better job of it,” he said. “I had interviewed my dad before he passed away, so I had a lot of older family history involving him and his parents. The book starts back with my grandparents (on both sides of the family), includes my parents and their history, as well as my own right up until I retired.”

Johnson began writing his memoirs about four years ago.

“I had written a rough draft, but forgot to make copies of it and my computer crashed,” he explained. “As a result, I had to start over again. I probably did a better job the second time around, but it was still frustrating. It took me almost half-a-year to get back to where I was. Overall, however, the process was a lot of fun and it brought back a lot of memories. I’d say a lot of it – maybe three quarters of it – is about my time in Meadow Lake.”

Johnson and his wife, Blanche, arrived in Meadow Lake in 1970, raised three sons, developed many friendships, changed many lives and created a lasting legacy before he ultimately retired in 2012 after a career of 42 years. Much of the unique experiences Johnson encountered during those four-plus decades is recounted in his book.

“Much of it involves things I saw in medicine,” he said. “Although I didn’t mention any names, people will recognize their stories. One of the more interesting stories I share is out how the first baby I delivered in Meadow Lake was the mother of the last baby I delivered here. I also write a lot about how medicine has changed, the interesting people I met around town, while another unique story is about how one night there was a knock at my door. I lived on the west side of town at the time, and the guy who was at my door said, ‘there is a dead guy on your lawn.’ I jumped up and ran outside. Sure enough there was a person lying face down on my lawn. I had been a coroner, so I checked his pockets. As I was doing this, the other guy, the one who knocked on my door said, it’s OK, I went through his pockets already. He doesn’t have any money’… There are many interesting stories like that which I share.”

Once available, the book can be secured through Johnson himself or at the Alliance Church in Meadow Lake. It is also listed on Amazon.

“I kept a diary since I was in high school,” Johnson said “I would write down events as they happened… When going back through them, I would see a short description of an event and it would all come back. The stories would just flow, but I still had to weed out a few interesting things I would have liked to put in. There were just so many stories I couldn’t include them all.”

Johnson also said the book serves as a love letter for his time spent in Meadow Lake.

“This community very quickly became my home,” he noted. “I came to really love the people here and I still do. That’s why I’ve never moved. This is my home.”

As for what’s next, Johnson wouldn’t say for sure but did reiterate the fact he has many more stories to share.

“I probably could have included most of the people in Meadow Lake because I new a lot of stuff about most people,” he said. “I have also thought about making a few notes about retirement life in Meadow Lake, but not sure if I will do anything more or not.”