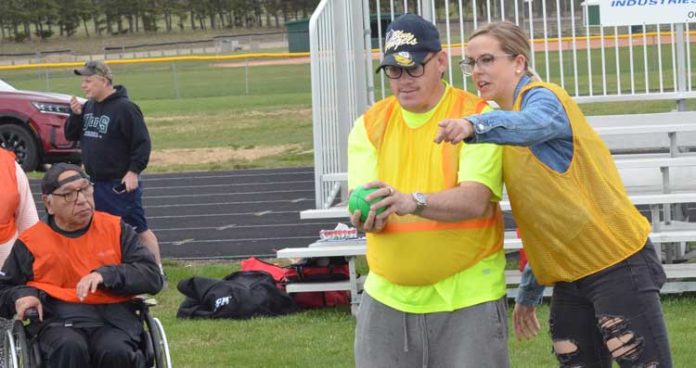 Don’t knock it until you try it.

That’s what athletes from Special Olympics Saskatchewan were saying in the wake of a special try-it day May 17 at Lions Park which introduced them to two new sports – bocce and soccer.

“We’re trying to build our programming here in Meadow Lake and area,” remarked Tanya Murphy, chair of Special Olympics Meadow Lake. “We have our support team from Special Olympics Saskatchewan here today to do some try-it camps with us, and some of the potential athletes are here as well.”

The activities themselves were followed by a celebratory dinner.

“Hopefully this turns out to be a recruitment opportunity for us to build our programs here in Meadow Lake and get some new sports up and running,” Murphy added. “We’re trying to gauge the interest for different sports in our area. In the past there has only been a bowling program for our athletes, so we’re trying to increase opportunities for them by offering different sports to see where their interests lie. If there’s enough interest we could start some new programs.”

While most people, if not everyone, is familiar with the game of soccer, bocce – sometimes anglicized as bocce ball – is an Italian game similar to lawn bowling but played on a shorter, narrower green.

“It’s been really fun,” stated athlete Alyssa Radtke. “It reminds me of bowling, and I really love bowling. I have issues where I can’t lift five pounds or more with my wrist, so this is a sport I can actually do.”

Radtke, however, said she does not plan to give soccer a go.

“I could see myself signing up for bocce – I love it, she said. “I’m not that coordinated, though, and I have a knee condition, so I’m not taking part in soccer.”

Murphy, meanwhile, said if there is enough interest in both sports, Special Olympics Meadow Lake can start things at a local level and see how they progress from there.

“There’s potential to move on to competitions within the region, the province and some of our Special Olympic athletes have moved on to Canada Games as well as World Games,” she said. “There are tons of opportunities and we’re hoping to build on that for them.”

As for the try-it day itself, Murphy said she was more than pleased with the turnout.

“We weren’t sure if the weather was going to hold out, so we did have other arrangements to move things into the high school if need be,” she said. “However, this is a great turnout.”

This was echoed by Jaret Dezotell, community coordinator with Special Olympics Saskatchewan.

“It’s definitely a very good turnout, more than I was expecting,” he said. “We’re very happy with the interest. It seems they’re starting to get the hang of things and are having a great time. They haven’t ran any programs in a couple years, so it’s nice to see the athletes out.”

“Anyone interested in coaching or just being part of Special Olympics are welcome to reach out to us,” she said. “We’re just excited to get more things going here in Meadow Lake.”