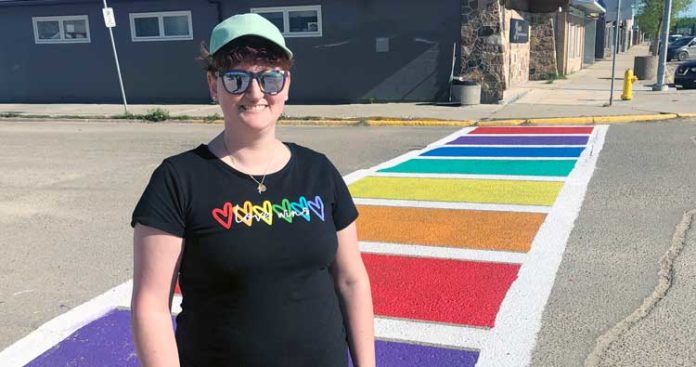 Meadow Lake is showing its pride.

Several events are planned for the month of June in celebration of Pride Month in the City of Meadow Lake, some of which already took place earlier this week.

“We do have a pride committee which has met several times in the past month to plan and organize these different events,” explained committee member Joanna Metz.

Pride Month kicked off Wednesday (June 1) with the third annual pride flag-raising ceremony outside city hall. This was preceded, however, by the painting of a rainbow crosswalk at the intersection of Centre Street and 3rd Avenue Tuesday morning (May 31).

“We also plan to walk in the Stampede Parade June 6 and there will be various events throughout the month including story time at the library, a ‘gaymes’ night, and possibly a coffee house and art night,” Metz noted.

The final schedule of events was approved at the committee’s most recent meeting May 29.

“It’s incredible to see so much support from the community,” Metz added. “It brings me so much joy and hope, just knowing people of all ages are on board and coming to our meetings. Our theme this year is ‘Creating Community’, creating an inclusive LGBTQ2S+ community Meadow Lake has not seen in the past.”

Metz also said attitudes toward the LGBTQ2S+ have improved significantly in recent years not only locally but around the world.

“There are still a lot of conservative ideals that don’t really allow or match up to support LGBTQ2S+ people, but we’re working on it,” she noted. “We’re always educating, encouraging safe spaces, advocating for the rights of people to be who they are.”

All members of the public are invited and encouraged to take part in the various activities throughout the month.

“We’ll also be handing out letters to local businesses with a calendar included so more people can be made aware of each event,” Metz said. “It’s going to be great.”