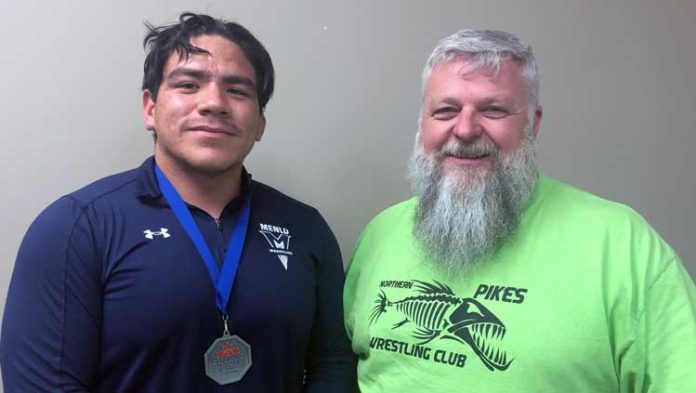 Jackson Serna has one goal in mind every time he steps on to the wrestling mat – to have his hand raised in victory.

This past weekend, Serna – who is originally from Flying Dust First Nation but considers Los Angeles, California home – competed at the Senior National World Team Trials in Edmonton. And, although he didn’t come out of the event in the top spot, he did have a little extra motivation going into his matches.

“Honestly, it was a boost,” he said of the contingent of Flying Dust youth who attended the trials to cheer him on. “It made me want to win even more. Before my matches, I would look up into the stands and see all of these supporters. They brought some Flying Dust youth to the trials so they could learn about wrestling and see it firsthand at its highest level in Canada. It just motivated me all the more to be the best I could be, so I could lead by example and show these kids how much you can accomplish if you put your mind to it.”

In the semi-finals, Serna overcame the second-highest ranked wrestler in his 125-kilogram weight class before falling to the number one ranked athlete in the final. Serna was able to lay claim to the silver medal, but said he understands the need to work even harder next time out.

“From my perspective, I think I wrestled the toughest in my weight class,” he said. “The number one guy is an Olympian, is ranked among the top 10 in the world and is a former world champion. The guy I beat in the semi-final is a World Junior silver medalist from a couple years ago.”

The second-place finish lands Serna a spot at the U23 worlds, which are set to take place in Spain in October. His performance also earned him a spot as an alternate at the upcoming Senior worlds.

“Satisfied is not the word for it,” Serna, who currently trains with the U of S Huskies noted. “I always want to win, and when the time comes that I do win it’s never enough. I want to be a world champion, an Olympic champion. I want to be the best in the world. As for my performance from this past weekend, well, in my mind I knew I was going to beat that opponent (in the semi-final). I had a game plan and I stuck to it. But, I didn’t win the whole thing and now, in the back of my mind, I know I have to do even more to win next time.”

Chris Brownrigg, who coaches the Carpenter High School wrestling team as well as the Northern Pikes Wrestling Club, was on hand for the trials in Edmonton. He likened Serna’s qualities both on and off the mat to two-time provincial and one-time national champion Jacob Ambroziak who also competed in the 125-kg. weight class.

“In a couple years, Jackson will be going for Olympic trials as well,” Brownrigg added. “One of the challenges Jacob also had was finding a good training partner – there’s not a whole lot of world class 125s kicking around. It’s only going to be a matter of time, however, for Jackson. He’ll get there. He wrestled very well on the weekend.”

Earlier this week, Brownrigg also accompanied Serna to Kopahawakenum School on Flying Dust First Nation where the athlete had an opportunity to address students.

“I like to talk to the kids and let them know it takes time and dedication to achieve the things you want in life,” he said. “Wrestling, it takes you places you never think it will. When I made the World Junior team back in 2019 I never thought I would go to Europe, to have opportunities to travel the world, see things and meet people I normally would never have met. It also opens up opportunities for post-secondary education.”

Serna’s wrestling career began when he was 14 years old.

“I was fortunate enough to attend a high school in L.A. that is one of the best wrestling schools out there,” he said. “I sort of fell into it. I love the sport because you do as well as the amount of work you put in. It’s just you and your opponent on the mat, and the success you achieve is all on you. I still hate losing more than I like winning, but, as I get older, I understand losing is not the worst thing in the world because you get to learn from it.”

Serna was ranked among the top five high school wrestlers in the State of California two years in a row, placed fourth at nationals in the U.S. during his senior year, and pursued wrestling in university before being injured.
“I soon decided to give it one more go, came up to wrestle in nationals in 2019, won Junior nationals and earned a scholarship to U of S,” he said.

Things were again halted, however, because of COVID-19 until more recently when Serna decided it was time to once again focus on his wrestling career full force.

“I know for a fact I will wrestle until 2024,” he said. “If I am progressing in the sport as well as I have this past year, I will probably stick with the sport until 2028. The Olympics will be in L.A. that year.”

Meanwhile, local youth looking to become involved in wrestling can do so by attending the Northern Pikes’ Wrestlefest Learn to Wrestle tournament and camp this Saturday (June 4) at CHS. For more info, visit the Northern Pikes Wrestling Club Facebook page.