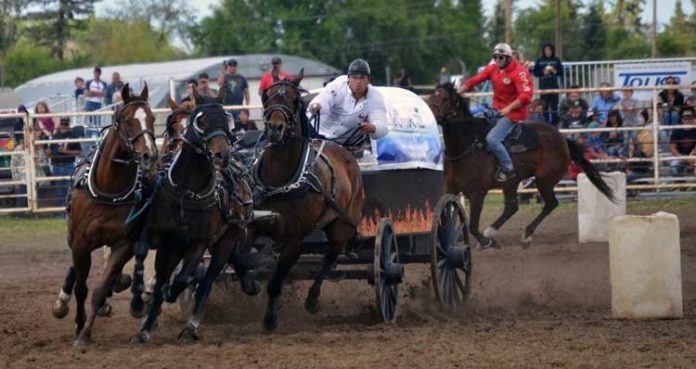 St. Walburg’s Jamie Labucane hopes he can hang on to the momentum he gained recently when the Canadian Professional Chuckwagon Association (CPCA) returns to Meadow Lake this weekend.

Laboucane was the fastest driver after three nights of racing in Poundmaker, SK Aug. 4-6, earning an aggregate time of 3:48.81 and going on to win the dash on the fourth day, crossing the finish line at 1:14.92.

“I won the aggregate and I won the dash,” Laboucane reiterated. “I was first overall after the first three days and, in the dash, I drew barrel three and was able to pick up another win. It was awesome. I had an injury on the left wheeler of my primary outfit going into the weekend, so I switched things around and the horses went right to work to produce two day moneys the previous weekend and another this weekend. They look good and they’re strong. My second outfit may not be quite as good, but they kept me in there, so I’m very lucky to have the barn I have right now.”

“I’m sitting in frost place right now, but (Meadow Lake’s) Logan Gorst and I have been trading the top spot back and forth all year – it’s been tough, but a really fun race right now,” he said.

The Poundmaker show was hosted by the Battlefords Tribal Council.

Meanwhile, Laboucane said he is looking forward to this coming weekend (Aug. 12-14) when the CPCA takes to the track at the Meadow Lake Stampede Grounds for its penultimate event of the 2022 season.

“Meadow Lake is always a great show,” he said. “So many great chuckwagon racers from the past and present call Meadow Lake home, so we always have a big crowd and there’s always a lot of support. It’s a really great show to be a part of.”

Laboucane also said he is confident he has what it takes to pick up another win.

“I think I have a good shot, especially if I keep this outfit sound,” he said. “We’ll be tough every night, but Todd Baptiste and Logan Gorst are in that heat too, and they’re no slouches. With a short track like the one in Meadow Lake, it’s going to be a close one.”

“No matter what you do, it’s always nice to do it at home, in front of the people you grew up with,” King said.

Although Meadow Lake does not currently have a grandstand, bleachers will once again be brought in to accommodate what is expected to be a healthy sized crowd.

“Flying Dust First Nation is hosting the event this year, and they are bringing as much seating over as they can from their facilities,” King noted. “They’re doing the best they can, but there’s so much support for chuckwagons here in Meadow Lake, if there was a facility like some of these other locations have, we’d definitely fill it up too. I just hope everyone comes out to show their support. We’re in wagon country for sure, and it’s not just home for me, but for a lot of other drivers as well. There are a lot of people excited to come drive here for sure.”