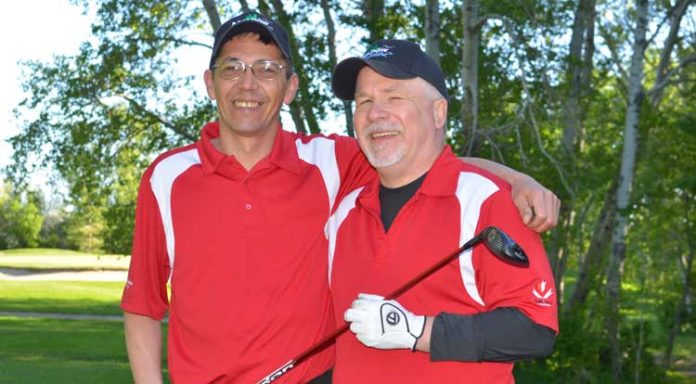 Gerry Nelson is a champion once again.

The Meadow Lake resident, along with his coach, Chris Villeneuve, recently shot a 110 and a 111 over two days to win the 2022 Canadian Open Blind Golf Championship. It’s a title Nelson has won on no fewer than five occasions throughout his career.

“The Canadian Open Blind Golf Championships were held last week at The Greens at Renton in Simcoe, ON,” Nelson said. “It’s a First Nations-owned and ran facility, and it’s very beautiful, very difficult, but we managed to play quite well. Chris and I played against six other golfers in our own category – the totally blind division – and we happened to win quite handily. As near as we can recall, this was our fifth Canadian Open Blind Golf Championship victory.”

Leading up to the the Canadian Open, Nelson and Villeneuve also competed in a two-day provincial Stableford tournament, also held at the Simcoe course where he shot a 107 and a 108 over the course of the event.

“What that means exactly is they do away with the different sight categories and everybody plays off their handicap or a net scoring system,” Nelson explained. “Chris and I finished seventh out of a total of 40 golfers. We were really quite happy with that finish considering we were playing against some partially sighted golfers who have some pretty darn good eyesight.”

As for his Canadian Open win, Nelson said it holds special significance to him considering it marks 25 years since the event was first introduced.

“It was the 25th anniversary of the Canadian Open Blind Golf Championships, and I organized, hosted and won the inaugural tournament in Saskatoon back in 1997,” he said. “To be able to win any time is very special, but this one especially felt great.”

Earlier this season, Nelson also took first overall at a provincial tournament in Saskatchewan in late June and, about a week later, he won the Western Canadian Blind Golf Championships in Calgary.

“The Canadian Open started in 1997, but I started playing competitively in 1991,” Nelson said. “When I lost my eyesight in 1988, I needed a little time to adjust to everything, but I always say it was golf that got me back into the swing of things. It was the nearest thing to being fully sighted I could still do really well, and it came back fairly easily for me. I had golfed a little bit beforehand – enough to know what a good swing looks like and what a good ball flight looks like. I was also fortunate to have a coach at the time who had taught other blind golfers before I came along. He made sure I was doing it right, it became a passion and I have loved playing for all these years.”

In addition to being an athlete, Nelson is also involved behind-the-scenes at various levels of the sport.

“Regionally, provincially, nationally, internationally, you name it,” he said. “I’m either the president of something or I sit on the board of something else. It’s almost like a full-time job, but it’s something I love to do. What also keeps me going is getting new players out and growing the sport. I realize what it did for me after I lost my eyesight, and I want to instill one important message in other blind and partially sighted people – never give up. There’s life out there after sight loss.”

Nelson also credits a great deal of his success to Villeneuve and his contributions as a coach.

“Chris has been my coach the better part of 30 years,” he stated. “He didn’t know a lot about golf when he first started, but he learned quickly, became very keen and very eager, and he’s just like having another club in my bag. What Chris brings to the table now I believe would take another lifetime to find someone else and to train them that well. He is just incredible, we know how each other thinks and we are so compatible out there… I wouldn’t be able to do this without him and I owe him so much for sticking with me all these years. I couldn’t and wouldn’t want to do it without him.”

Villeneuve, meanwhile, said it is an ongoing pleasure to coach Nelson.

“I love coaching Gerry, but this year’s win was very special,” Villeneuve said. “We’ve been practising a lot since he moved to Meadow Lake, and the golf course in Ontario was unbelievable. It was very challenging, but he stuck with it throughout the entire week. It was one of the best wins we’ve ever had. Coaching Gerry is very inspiring. He’s blind, but he golfs and he golfs well. He’s also very competitive, and I’m fairly competitive too. I give 100 per cent to Gerry, I line it up and, when he pulls it off, I get a bit of a rush. It’s a great experience, I love doing it and I will do it for as long as I can.”

“But, he persevered throughout the whole week, we had great teamwork and it was one of our better wins for sure,” he said.

In closing, Nelson also acknowledged the crew at the Meadow Lake Golf Club, the course at which he regularly practices.

“I want to thank (groundskeeper) Daryl Wood at the local golf course and the head pro, Sean Collins,” he said. “When I moved up here (from Saskatoon), they welcomed me with open arms and let me play out there almost any time I want. I want to take my hat off to them, and to the Meadow Lake Lions Club which has been very helpful to us in the past, and to the local club members who have also been supportive. We appreciate it.”