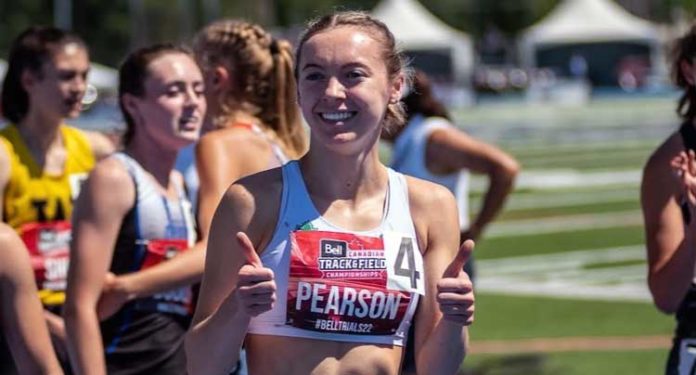 It wasn’t the end result she was hoping for, but Meadow Lake athlete Avery Pearson has no regrets about her recent performance on the world stage.

Pearson recently returned from the 2022 World Athletics U20 Championships in Cali, Columbia where, on day one of the women’s 800-metre event, she placed fifth in her heat with a time of 2:10.94. It was a much different result from last year when Pearson competed at the U20 Worlds in Nairobi, Kenya, winning her heat and eventually placing seventh overall.

“Compared to last year, this world meet was a true representation of world class athletes,” Pearson told Northern Pride. “There were a lot ore countries in attendance. It was a true representation of the best U20 athletes in the world. Last year, Australia and the U.S. weren’t at the meet. There was a lot of depth this year, it was a lot tougher.”

Pearson’s fifth-place finish in the heat meant she did not advance, having been eliminated from the competition after only the one race.

“I was in the same heat as the eventual world champion, Roisin Willis of the U.S.,” Pearson said. “Of course, I was upset immediately after the race. But, after having some time to process the result, it was still such an amazing experience. I raced against the world champion and the competition was so tough… It also gave me some great motivation when it comes to improving for the future.”

The competition aside, Pearson said it was also a unique experience to see as much of the host country as she could during her brief time there.

“It was a very neat place to see,” she said. “South America presents such a different lifestyle than what I’m used to. The city looks so much different than ours. It was very mountainous and, on the last day we were there, we got to do a little bit of touring. We also saw lots of the city while busing from the hotel to the stadium. They crowd the streets a little bit more there, the traffic is crazy, there were motorcycles weaving in and out of the cars. But, we did get to go up the mountains a little bit since there fewer COVID-19 restrictions than there were when I was in Nairobi last year. We got to see more of landscape, which is very pretty and not what I’m used to seeing.”

Pearson went on to describe the climate as very hot and humid.

“It was also very buggy – the mosquitoes were crazy and we all came home with bites all over our legs,” she said. “The heat also factored into the competition… It was very hot when we were racing, and, in the stadium, the temperature was eight degrees hotter than it was outside. Still, to make two national teams before I’m 20 is something I am very proud of.”

Pearson, a graduate of Carpenter High School, will be entering her second year of kinesiology studies at the University of Saskatchewan this fall.

“I’m not a junior (athlete) anymore and won’t be competing at the U20 level anymore,” she said. “Now, I’m excited to get into more competitive races within Canada because I will be on the younger side of the age category I will be going into. Our 800-metre women are doing very well in Canada right now, so, for next year, my goal is to keep progressing, to keep getting faster. It will be trickier to make more Canadian teams, but, if I’m patient, it will come.”

In the meantime, Pearson plans to focus more heavily on her university running career.

“I’m not going to be doing cross-country but I will be doing indoor track,” she said.

She is also gearing up for the Canada Summer Games which are underway this month in Ontario’s Niagara Region.

“Track and field starts in about six days, so I will be leaving for Ontario in about five days,” Pearson said. “Track starts Aug. 16.”