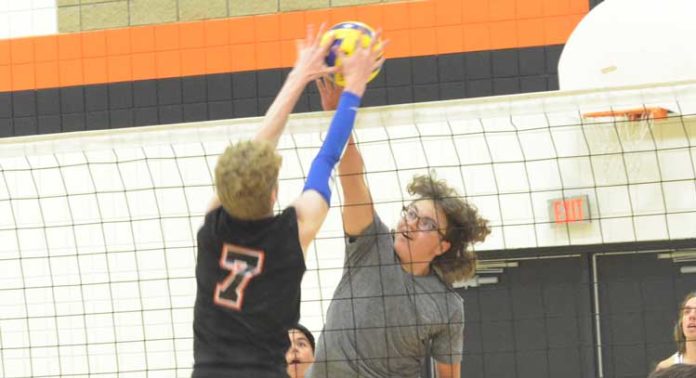 The Carpenter High School boys and girls basketball teams are back on the court.

Volleyball tryouts were held at the CHS gymnasium last Thursday (Sept. 1) and, according to boys coach Trent Marsh, things are looking optimistic in terms of just how successful his squad can be. He also said the team will have a chance to prove itself as early as this weekend.

“The boys ‘A’ volleyball team’s first tournament will be at St. Mary Catholic School in Prince Albert Sept. 9 and 10,” Marsh explained. “Following that, the next weekend (Sept. 16 and 17), is actually our home volleyball tournament. We will have two of our own teams competing, while also hosting 11 others.”

Marsh went on to say, based on what he’s seen thus far, the CHS boys have also put on some size compared to last season.

“I believe we’ll probably be a little bit bigger and a little more physical than we were last year,” he said.
Also pumped for the coming season is fellow boys coach Cheyne Dallyn.

“We’re running a senior and a junior team again this year, and both have pretty full schedules,” Dallyn said. “The senior team will also be hosting provincials later this year, so it’s a big year and there will be a huge demand on the community and on us, but it’s fun to be able to host an event like that. As for what we’re really looking for this season, it comes down to growth. A lot of these guys have really only had one year now of competitive volleyball because we were shut down for so long (because of COVID-19). We’ll see what they can do for another full year. It’s exciting to see a lot of growth out of our young athletes and our seniors.”

Following the Sept. 16 and 17 home tournament, Marsh said the team has a great lineup of tournaments on the schedule.

“The exciting thing about this year is we will be hosting the 4A boys provincials,” he reiterated. “It will be nice. That takes place Nov. 24-26. Hopefully we can do a good job in hosting, and just have fun with it.”

Marsh went on to say last season was a memorable one for the CHS boys.

“We were second at provincials and I do feel we will do well again this year,” he noted. “We’ll really focus on the defensive side of things, while, offensively, we do have guys who can put the ball away. We’re good that way. It’s going to be a fun season. We have some really talented athletes and some big, physical kids coming up in Grades 9 and 10. Our future is looking positive.”

Both the ‘A’ and ‘B’ teams will be overseen by both Marsh and Dallyn, with help from Cordelle Toews.

“We had more than 30 kids come out for tryouts,” Dallyn said. “It’s really good to see more kids coming out after being a year away from not being able to play anything. As for hosting provincials, we’re just looking forward to the experience. The goal will be to make it into a semi-final matchup and then see what happens from there.”

Meanwhile, the CHS girls are also looking forward to a proactive volleyball season.

“This year I am looking forward to a strong female program at CHS,” noted girls coach Desirée Klarner. “We had almost 50 girls come to tryouts, so we will form three teams. Our athletes are more dedicated every year and the level of play increases which makes choosing a team very difficult, but this is a good problem to have. Our ‘A’ team will put the most miles on this year. This weekend we kick off the season in Prince Albert at Carlton Comprehensive High where the girls will play in the pep rally in front of the school. This will be an exciting way to start the circuit.”

The CHS girls home tournament is scheduled for Oct. 21 and 22.