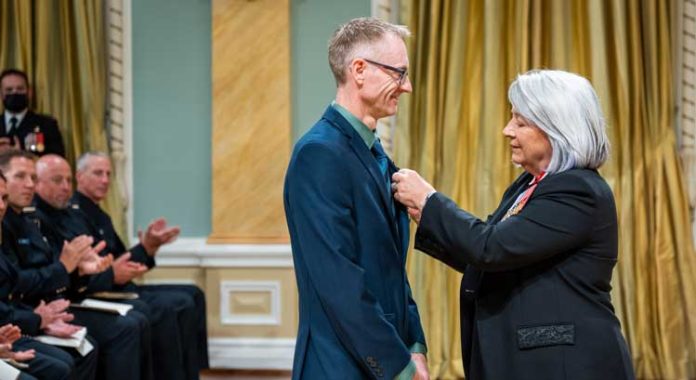 Sometimes you don’t need to think, you just need to act.

This is something Meadow Lake’s Dwayne Voth understands wholeheartedly following a 2018 bear attack in the Meadow Lake Provincial Park and his subsequent efforts to not only intervene, but to also potentially save a life. These efforts were recognized last week when Voth travelled to Rideau Hall in Ottawa where he was presented with a Medal of Bravery from Gov. Gen. Mary Simon. The presentation took pace Sept. 9.

“It’s very honouring and humbling at the same time,” Voth told Northern Pride shortly after receiving his award. “It was very humbling being with the many other recipients who were there and hearing their stories too. There were 41 other recipients here from across Canada. Meeting the governor general was also quite an honour.”

On June 10, 2018, Lanigan resident Casadi Schroeder was awakened by the sound of a black bear outside her cabin at Bethel Gospel Camp located near Jeannette Lake. She went to investigate and, as the bear charged toward her, her husband, Brad, ran from the cabin and started punching and kicking the animal. From his own cabin, Voth heard screaming and looked out to see the bear clawing the woman’s legs. He ran outside and struck at the animal, before pulling the Schroeders back inside his cabin. Conservation officers and emergency services arrived soon after to remove the bear.

“It was about 7:30 a.m. on a Sunday morning,” Voth recalled. “We woke up to a lady on our doorstep screaming for us to let her in. I opened the door and saw this bear on her, mauling her. My reaction was to try to do my best to punch and fight the bear in an effort to free her from the bear. Her husband was there as well, doing the same thing.”

Brad Schroeder also received a Medal of Bravery, which was presented to him at a previous ceremony.

“There was a point where the bear did jump back and we were able to get both Casadi and Brad into our cabin,” Voth continued. “We tried to close the door, but the bear still had his head inside. I kicked him as much as I could until he took his head out, and then I was able to pull the door shut.”

Voth was not injured during the incident.

“I was very fortunate, but Brad was quite injured and, of course, Casadi was as well,” he noted. “I acted very much on instinct. My wife, Jennifer, was in the cabin as well and was able to get our kids into their room and out of the way. She also helped Casadi out as well, she helped take care of her.”

Voth’s recent trip to Ottawa was his first ever and, in addition to the ceremony at Rideau Hall, he and his family also made the most of their time in the nation’s capital.

“We’ve been touring around – our hotel is quite close to Parliament Hill,” he said. “We’ve been looking at the sights around here. There are a lot of historical buildings. We also visited the ByWard Market, which was quite interesting. Gary Vidal, our local MP, is also here with us and plans to give us a tour of the House of Commons, and we’ll probably head (across the river) to Gatineau, Québec and take in the historical museum there. This is a very beautiful, calm place.”

Vidal was also in attendance for the medal presentation.

“It was an honour to attend the Decorations for Bravery ceremony at Rideau Hall to witness Dwayne Voth receive the Medal of Bravery Award from Gov. Gen. Mary Simon,” Vidal said. “Dwayne’s intervening in a bear attack in 2018 is an example of the selfless and generous nature of who he is as a person. Congratulations to Dwayne on the most-deserved recognition.”

Accompanying Voth on his trip to Ottawa was his wife, as well as their two daughters, Kaylah and Tana.

“We have two older boys, but we brought the two girls for this very reason,” he said.
Jennifer Voth, meanwhile, also said the trip holds extra special meaning because they were in Ottawa on the day of Queen Elizabeth II’s passing (Sept. 8).

“That really threw the people at Rideau Hall for a loop because they didn’t know what the protocol was, but the governor general said the Queen established these awards and she would have wanted them to go forward,” she said.

The Queen’s passing did, however, cancel a planned tour of the Rideau Hall residence.
“We did bring flowers to lay at Rideau Hall in memory of the Queen, though,” Jennifer Voth added. “Our daughters put them down – it was a special opportunity for them.”

As for the incident at the provincial park, Dwayne Voth said he is thankful, in spite of the injuries, everyone involved was OK in the end.

“There were some physical injuries and trauma, but it could have turned out a lot worse,” he said.

This was echoed by his wife.

“There were a lot of recipients (Sept. 9) whose stories didn’t have that same ending,” she stated. “There were many incidences where the person they were trying to rescue didn’t make it or they didn’t make it themselves. We met a mother who lost her son when he was trying to save somebody else, which was very humbling. We’ve been enjoying this experience and thinking of what a blessing it is to be given this honour, but it’s not the same for everybody. For some people it was really hard to be there. That was very humbling for me. Every single story had a level of trauma to it, and, in every single story, people acted on impulse and showed a certain level of care for humanity which, in some cases, cost them their lives.”

The Medal of Bravery recognizes acts of bravery in hazardous circumstances. The award itself is a circular silver medal on the obverse of which is a maple leaf surrounded by a wreath of laurel, and on the reverse of which appear the Royal Cypher and the inscription ‘Bravery’.