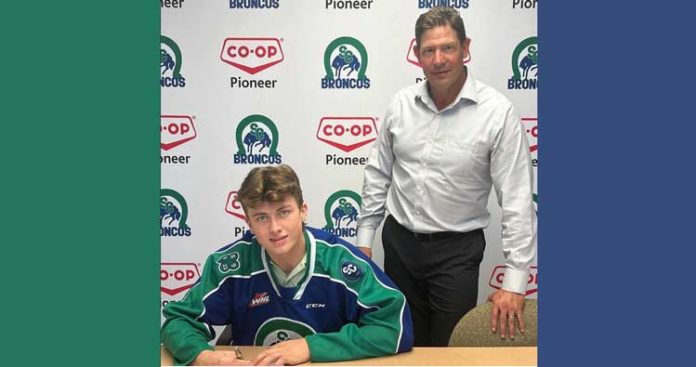 Dawson Gerwing’s dream of competing in the Western Hockey League (WHL) has become a reality.

Recently, the WHL’s Swift Current Broncos announced they have signed the 2006-born, former Meadow Lake resident to a standard player agreement. Last year, Gerwing was drafted 48th overall by the Broncos in the 2021 WHL Prospects Draft.

“By signing this agreement, it means they can now use me in games,” Gerwing told Northern Pride. “It’s not guaranteed I will play (regularly) this year, but I will next year for sure. It feels great and I am sure to get some games in this year.”

In fact, Gerwing played his first exhibition game as a member of the Swift Current roster this past Friday (Sept. 9).

“It’s pretty exciting to be able to get some Western Hockey League experience,” he added. “Signing the standard player agreement puts me one step closer to my goal. I’m officially part of the organization now, they can use me and I’m guaranteed years of education at a post-secondary school for however many years I play. It’s great.”

Gerwing, the son of Trevor and Megan Gerwing, moved from Meadow Lake to Saskatoon last year. He spent the 2021-22 hockey season with the Battlefords Stars of the Saskatchewan U18 League, picking up 35 points (16-19-35) in 39 games. He then added a pair of goals in four playoff games.

“We are excited to sign Dawson here at camp,” said Broncos general manager Chad Leslie. “He came back in incredible shape and showed very well with our older group. He has the potential to be a power forward with the ability to finish, someone we feel can be a very important player come playoff time.”

Gerwing clocked in during Broncos training camp at 6’2’’ and 208 pounds.

“I finished the year practising with the team a few times and the GM was talking to my mom, saying they wanted to sign me at the training camp and to use me for at least the pre-season,” Gerwing noted. “I kind of had an idea I would be signing, but it’s nice to know it’s actually happened and it’s official.”

Gerwing went on to reiterate how the signing is simply the next step in his hockey journey.

“I was in a tougher spot because, although I was a high, third-round pick, the Broncos had drafted four other people before me,” he said. “They had a lot of high draft picks and it probably would have been an easier road for me in a different organization, but I am happy to be in this one and I believe everything is going to work out. I’m excited and I am happy to have achieved this goal.”

With the addition of Gerwing, the Broncos have signed four of their top-five selections from the 2021 WHL Prospects Draft.

“Right now I am in Swift Current billeting with the team,” Gerwing said. “We have about 10 extra guys right now for the exhibition season because a lot of them will be going out to NHL camps. They need some extra bodies and, by opening night, they will have their final roster.”

Gerwing, who is currently in Grade 11, is taking his studies online.

“You can go to high school in Swift Current, but it’s hard with our schedule,” he said. “I also don’t know where I will be going forward. I could end up back in Saskatoon or I could end up staying here. This is what works best for now.”