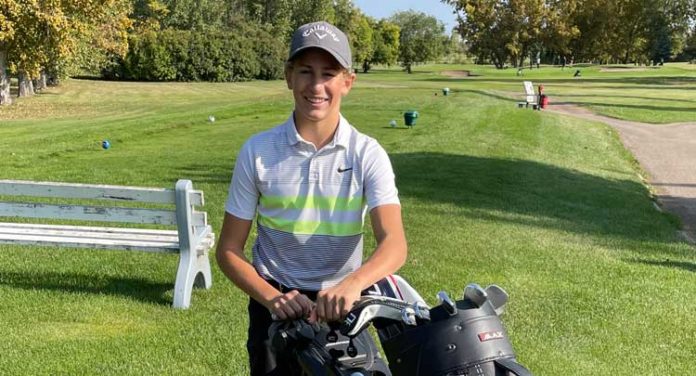 Noah Pigott is a team player.

That’s why the Grade 11 student at Carpenter High School has decided to join his peers on the volleyball court when they compete in Saskatoon this weekend instead of taking part in the Saskatchewan High Schools Athletic Association’s (SHSAA) provincial golf championships taking place at the same time at Jackfish Lodge near Cochin.

“This past week, the Northwest district golf championships were held at the Meadow Lake Golf Club, an event that featured 46 golfers – boys and girls – from across the district,” explained CHS golf coach Kendra Paramchuk. “We had six golfers from CHS and Noah Pigott won with a score of 75, which is pretty amazing. Unfortunately, however, he is a volleyball kid and is going to a volleyball tournament next weekend instead of competing at provincials.”

The top four district golfers from each category qualify for provincials, so, with Pigott opting out, the fifth-place competitor – CHS Grade 12 athlete Marshall Senger – will join Koen Chocan of Lloydminster, Aidyn Williamson of St. Walburg and Adryan Bugiera of Lloydminster at provincials.

On the girls side, St. Walburg athlete T’kayah Sim will compete at provincials after the district winner, Leanne Laursen of Pierceland, also opted out of next weekend’s event.

“It’s exciting for our district to send four males to provincials,” Paramchuk said. “Marshall has golfed since Grade 9, and you can see how he’s put in the time and has improved over the years. As for Noah, he had a great score to win districts and he has a bright future ahead of him when it comes to the sport of golf. Obviously, though, it’s hard to be a multi-sport athlete, especially when things fall on the same weekend.”

Pigott, meanwhile, said, he was very pleased with the outcome of the district event.

“Going into it I had no expectations – I just wanted to play a round of golf and have fun, and that made it feel as though I had no pressure on me and I believe that’s what influenced my score,” he said.

Pigott has competed in golf for CHS since his first year at the school.

“I played in districts last year as well, and I also went to provincials but this year is a bit different,” he said. “Following our first volleyball tournament of the season, we came to the conclusion this is a very competitive year for us. I want to be there and don’t want to miss too much of it. This could be the highest level of volleyball I play for a while and I want to make sure I am still with the team and up-to-date in everything we do. If I compete at (golf) districts next year, I’m fairly certain I will qualify for provincials again. Right now I am happy with my decision.”

Pigott also said he is fully supporting his fellow golfers when they compete next weekend.

“It can be a little nerve-racking, so I hope these other kids just have fun and realize the game isn’t always about shooting a great score, but also about being outdoors and having a great time,” he said. “I wish them all the best of luck.”

In closing, Paramchuk expressed her gratitude to volunteers Kevin Hubbard and Neil Curtis who assisted the CHS athletes during the recent district golf competition.

“It was also great to see so many golfers come out, and the weather was perfect,” she added. “It was also a great way to spotlight our golf course in Meadow Lake.”